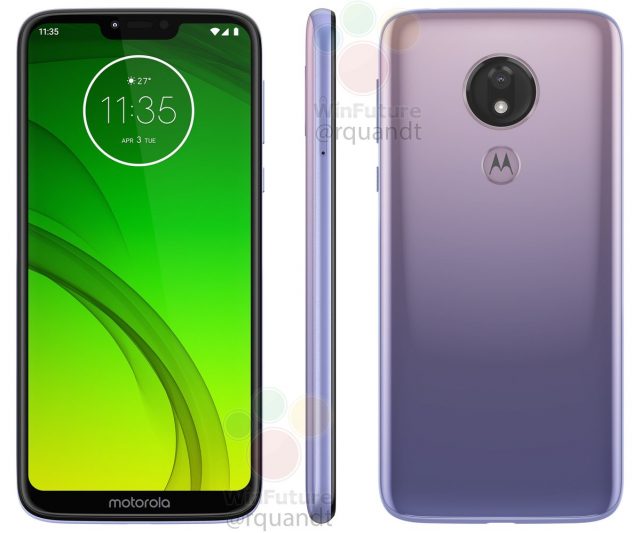 As the entire world is talking about Samsung’s next-gen Galaxy S10 which is going to be announced during the MWC event (February 20), Motorola is getting ready to take the smartphone industry by storm with Moto G7 Power. This flagship smartphone is scheduled to launch tomorrow (February 7th). However, this doesn’t mean that we have to wait another day to see what the new smartphone looks like.

What’s great about big companies such as Motorola is that keeping a secret is nearly impossible for them. New smartphone leaks are always popping up on the web and Moto G7 Power is the latest one to make an appearance. Roland Quandt is a reliable leakster and he is the one who posted the leaked press render of Moto G7 Power on Twitter.

The picture that Roland Quandt posted on Twitter shows us that Moto G7 Power will ship with a sleek design that uses a display top-notch. This design has been “borrowed” from Apple which first introduced back in 2017 when it launched iPhone X. Leaving the leaked picture aside, the smartphone’s full hardware specs sheet has also been leaked a couple of days ago.

As everyone can probably tell from the smartphone’s name, the most important hardware part that Moto G7 Power has to offer is its battery. A previously leaked TENAA report has revealed that Moto G7 Power will be fueled by a massive 5,000 mAh battery that can last for days on end.

According to the leaked TENAA report, Moto G7 Power will run on Google’s latest Android 9.0 Pie and it will be powered by a 1.8GHz octa-core SoC that is paired to 6GB of RAM. Moto G7 Power will also feature a 6.2-inches display that uses FHD+ technology.