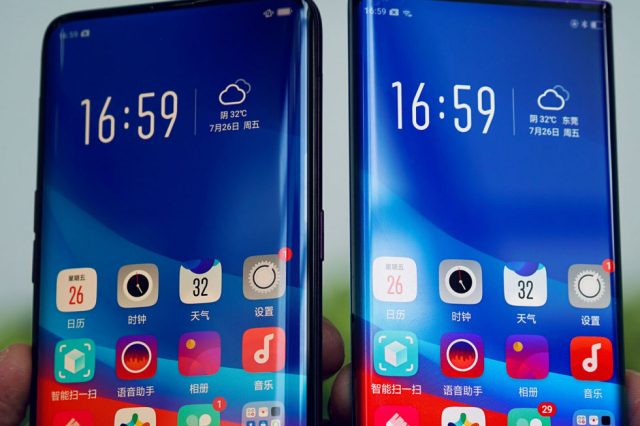 Apple was the one to start the all-screen display race in the smartphone industry back in 2017 when it launched iPhone X. However, now it seems like Apple has been left behind because Chinese based companies such as Vivo and Oppo are taking all-screen displays to a whole new level. A new smartphone from Oppo called Find X has recently been leaked on the web and it shows to everyone that Oppo has created a next generation display design called “waterfall screen”.

One of the things that makes Oppo stand out when compared to other Chinese based smartphone manufacturers is the fact that Oppo loves to innovate. Oppo is investing lots of resources in the development department and it’s all paying off. Just take a look at the picture of Find X (featured above) and see how amazing the new smartphone looks.

The waterfall display bends on both the left and the right side and what makes it stand out the most is the fact that it bends at 88-degree fold. This basically makes the bezels invisible to the user. We should note that the fact that Oppo is developing the waterfall display technology also means that Oppo is getting ready to start designing its first foldable smartphone and follow in Samsung’s footsteps.

On the downside of things, Oppo doesn’t want to reveal any additional information about the upcoming Find X smartphone such as its price or key hardware specs. Although, we think that Find X is going to be a high-end smartphone that will be equipped with the latest CPU and GPU. The reason behind this is that Oppo is surely not going to use the waterfall display technology on an entry-level device.