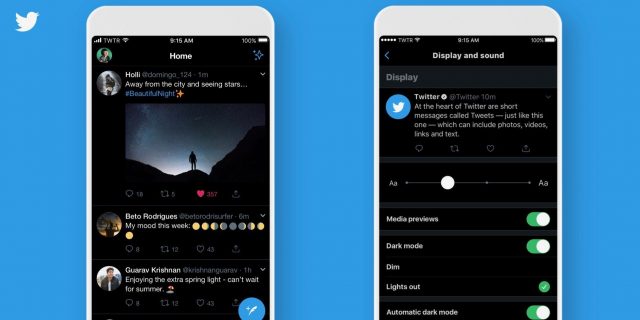 Twitter is one of the world’s first apps to start experimenting with the Dark Mode feature and now, Twitter has announced that the mode is going to be released to the iOS version of Twitter. This information was announced in a press release that took place earlier today and the Dark Mode is being rolled out OTA (over the air) to all iOS fans. Therefore, we are advising all iOS fans who enjoy using Twitter to make sure to keep their devices connected to Wi-Fi in order to receive the update as soon as possible.

The developers who are in charge of the social media platform were asked what is the purpose of the new Dark Mode and Bryan Haggerty who is the Senior Design Manager at Twitter answered with the following statement: “Giving more people options to personalize their experience on Twitter based on what makes them most comfortable is what the latest update to Dark Mode is all about.”

Three Versions of the Mode

We should mention that the Dark Mode feature for Twitter is a bit different than on other apps. The reason behind this is that Twitter’s Dark Mode is going to come in three versions and we are going to list them down below just like the developers described them in the patch notes:

Dim is the current Dark Mode theme that we introduced in 2016 – a blue/grey color that still gives people a more comfortable way to enjoy Twitter for any environment you’re in and helps reduce eye strain in low lit environments.

Our new theme for Dark Mode, which is a pure black color palette that emits no light since the pixels are turned off. This is a great option for those who want an even darker theme for low lit environments that reduces eye strain, and can potentially help with saving battery.

Now, Twitter for iOS devices can enable automatic dark mode to switch from light to the dark mode theme of their choice according to their timezone. This feature takes the burden off of people to make the adjustments. If you’re using Twitter all day long, it’s better on the eyes to have a tool that adjusts for the varying environments, contexts, and atmospheres you’ll experience throughout the day.