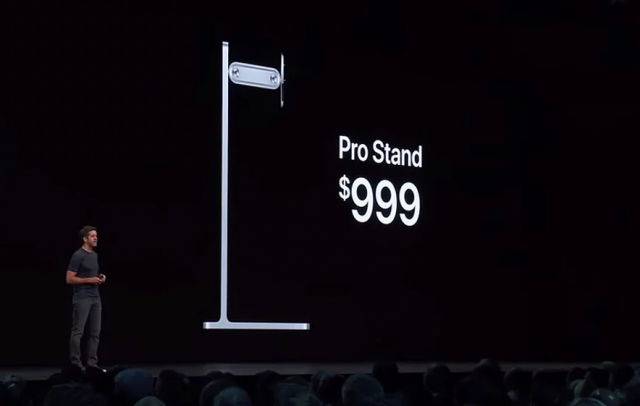 The highly anticipated WWDC event where Apple reveals its latest products and software releases kicked off yesterday and everyone has been talking about Apple’s announcements ever since. The Cupertino based tech giant revealed many exciting things during the press conference such as its upcoming iOS 13 update for example, but there was one moment during the event that almost had the crowd booing. We are talking about the $999 Mac Pro Stand.

Apple’s press conferences used to be something amazing. People would stand in long lines in order to be a part of the live crowd but unfortunately, things have changed during this past couple of years.

Apple is already infamous for overpricing its products and customers have had to endure lots of super expensive “upgrades” for accessories such as chargers and dongles that simply didn’t make sense. Well, Apple took this to the next level when it revealed its brand-new $999 computer stand.

As everyone can surely imagine, no one clapped when Apple revealed its $999 computer stand. The stand is as expensive as the company’s latest iPhone XS models and to make things even worse, Apple fans can add $300 more and purchase a MacBook Pro laptop.

Even though the Mac Pro Stand is the perfect device to support the new 32-inch, 6K display monitor which is priced at the whopping $4,999, we think it’s safe to say that paying one thousand dollars for a stand is just way too much.

This shows us that Apple is no longer interested in providing its customers with premium products that they can’t find anywhere, and that the company has switched its entire focus towards making profits. Otherwise, why would Apple price the stand at such a high price tag? On the bright side of things, the stand can flip, but that’s about it.