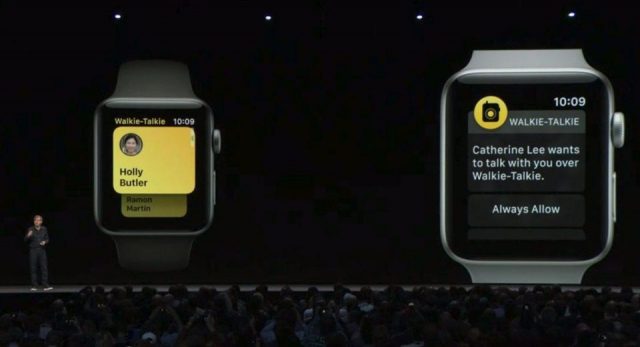 While Apple might receiving criticism for many things such as overpricing its products, there is no one thing that no one can blame Apple for and that is user security. The Cupertino based tech giant puts a high price on the security of its users and it always does its best to encrypt all data that is stored on an iOS powered device. This is why no one should be surprised to find out that Apple has decided to disable the Walkie-Talkie service after it found out that it might have a security breach.

Some of you might remember that there was a security flaw in Apple’s highly popular FaceTime app which made it possible for bad actors to intercept video calls. Apple quickly fixed this problem and it announced that there wasn’t any bad actor that exploited this bug. Now, Apple believes that Walkie-Talkie is affected by the same bug and it disabled the service.

“We were just made aware of a vulnerability related to the Walkie-Talkie app on the Apple Watch and have disabled the function as we quickly fix the issue. We apologize to our customers for the inconvenience and will restore the functionality as soon as possible. Although we are not aware of any use of the vulnerability against a customer and specific conditions and sequences of events are required to exploit it, we take the security and privacy of our customers extremely seriously. We concluded that disabling the app was the right course of action as this bug could allow someone to listen through another customer’s iPhone without consent. We apologize again for this issue and the inconvenience,” said Apple to TechCrunch.

Let’s hope that Apple fixes the Walkie-Talkie issues as soon as possible since the service is fun to use. In addition, we want to give praise to Apple for admitting that there is an issue in its software and for not trying to keep things secret.