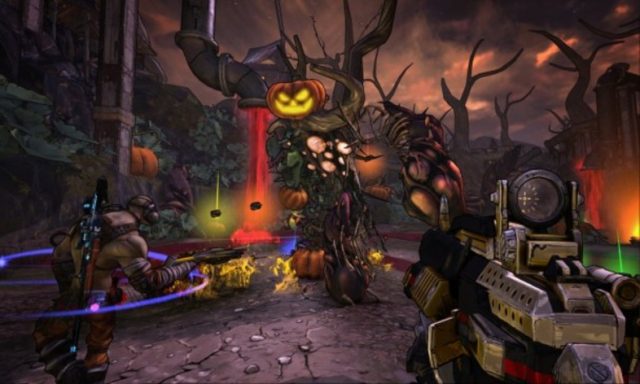 Even though Borderlands 3 has launched only two weeks ago, it has already become one of the most popular games in the world. After all, Borderlands 3 was years in the making and the anticipation for the game was at an all-time high. The developers who are in charge of Borderlands 3 know that they need to keep the millions of players interested in the “shoot-and-loot” game and they have announced that Borderlands 3 is going to receive its first in-game event called Bloody Harvest.

During a new video from Gearbox Software (featured below), the developers announced that Borderlands 3 is going to get its first in-game event. As previously noted, the event is called Bloody Harvest and it’s scheduled to go live in late October. Considering the date, it shouldn’t come as a surprise that the event is going to be Halloween themed.

The developers confirmed that the event is going to be Halloween themed and not just that, but they also talked about the fact that Bloody Harvest will introduce a bunch of new haunted foes in a new area called Heck area. The enemies will hinder the player’s vision with terror.

We also want to note Bloody Harvest is going to introduce a new boss called Captain Haunt. Borderlands 3 fans should be pleased to find out that they can equip “anointed” attachments that are going to make it possible for them to bring terror to others.

The last and most important thing that we want to cover about the upcoming Borderlands 3 in-game event is that is going to be free to everyone who has purchased Borderlands 3. However, players will need to progress far enough to leave Pandora and to have the option of visiting Sanctuary III in order to access the event.