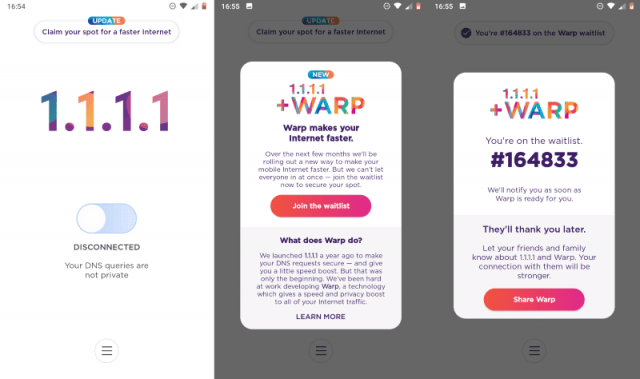 With news of European lawmakers trying to place restriction on the internet’s free use, especially when it comes to memes, the folks who are in charge of Cloudfare have decided to give people the freedom that they need and they have announced that a free VPN service is going to be included in Cloudfare’s 1.1.1.1 DNS service. The VPN is called “Warp” and it will make sure that the users of the DNS resolver have complete privacy whenever they browse the web from their smartphones.

First things first, Warp is entirely free to use. This means that Cloudfare users will not need to pay a single extra dime in order to access the features that Warp brings. This is great news for European residents because the latest act passed by lawmakers is trying to place restrictions on the internet.

As all Cloudfare users know by now, the 1.1.1.1 DNS service already keeps smartphone users by encrypting their internet traffic. However, things are now going to get even better because Cloudfare will give users access to Warp.

Warp doesn’t just encrypt the user’s connection to Cloudfare’s servers, it also compresses the online content everywhere possible in order to reduce the overall mobile data that users consume on the regular. Nonetheless, using Warp will completely mask the internet traffic of users, thus providing them with full internet anonymity.

The folks who are in charge Cloudfare wanted to make it clear that the only thing they care about is user privacy and they vowed to keep all privacy protections that were in place with 1.1.1.1.

Not only that, but the developers have also stated that they will never sell user private data to advertisers or even ask users for any type of identifiable information such as an email address.