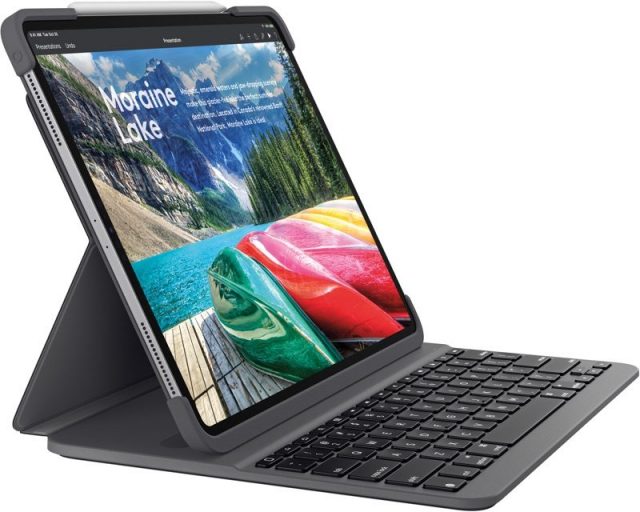 If you love using Apple’s 11-inch or 12.9-inch iPad Pro models in order to get work done, then we have some great news to present for you today. Logitech announced that it will launch a new keyboard case called Slim Folio Pro that has been specially designed for Apple’s 11-inch and 12.9-inch iPad Pro models. This is a keyboard case like none other and it features a built-in backlit keyboard that is the ideal alternative to the highly expensive Smart Keyboard that is being sold by Apple.

The new keyboard case called Slim Folio Pro can be connected to Apple’s new iPad Pro models via Bluetooth. This is a big improvement in comparison to other keyboard cases that use the Smart Connection.

However, Slim Folio Pro users will not be required to connect the keyboard case that often because Logitech claims its battery can last for up to three months on a single charge.

What makes the Slim Folio Pro special is the fact that it features different configurations. Theses configurations can be used in order to make the keyboard case more suitable for activities such as drawing, typing or simple entertainment.

Talking about typing, Logitech is saying that the keyboard of Slim Folio Pro has the “perfect bounce“ which will make it easier for iPad Pro users to type fast and accurate.

As previously mentioned, the keyboard case from Logitech has been specially designed for Apple’s new iPad Pro models. Therefore, no one should be shocked to find out that Logitech has equipped the keyboard with a bunch of iOS shortcuts that span from edge to edge.

The shortcuts can be used to adjust the brightness, change the volume and much more. In addition, the Slim Folio Pro ships with a magnetic latch that can be used to hold the Apple Pencil in place.