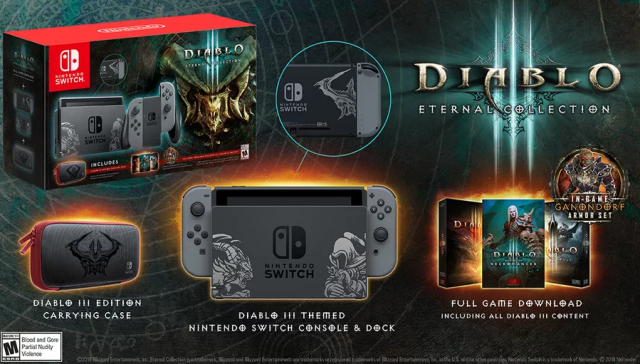 If you are a fan of Diablo 3, then you should be excited to know that a special Nintendo Switch Diablo 3 Bundle has been announced. Nintendo revealed that the bundle will be available to purchase from GameStop starting November 2nd. The reason why Nintendo and Blizzard have picked this date to launch the bundle is because that’s when Diablo celebrates the date when it was first launched.

The bundle will launch exclusively in the US for starters, but it will surely arrive in Europe and other marketplaces during the upcoming months. Nonetheless, fans of the game who decide to purchase the Diablo 3: Eternal Collection Switch Bundle will receive a download code for the game, a Diablo-themed carrying case and the Switch console itself.

To make things even better, the special edition console will be covered in cool looking Diablo artwork. Another cool thing about this Diablo 3: Eternal Collection Switch Bundle is the fact that it also comes with the fan-favorite Ganondorf armor set. The bundle is priced at $359.99 and the carrying case comes as a free accessory.

We should mention that Blizzard is expected to make a big Diablo announcement during the upcoming Blizzcon event. Some are speculating that Blizzard wants to launch a new DLC expansion for the game or to maybe even announce Diablo 4.

On the downside of things, Blizzard has been doing a good job of keeping information from leaking out and we don’t know what the company’s plans are for Blizzcon

However, Blizzcon is going to start on November 2nd which is exactly the date when the bundle becomes available for purchase at GameStop which leads us to believe that Blizzard is indeed planning to reveal what’s coming next for the Diablo franchise.