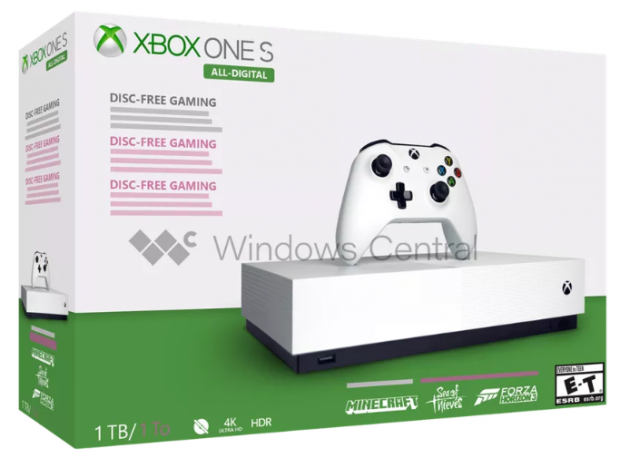 Windows Central has somehow managed to get their hands on leaked Microsoft documents and a press render which confirm that the tech giant is planning to launch the disc-less version of Xbox One S on May 7th. The console is codenamed as “Maverick” and everything on it will be digital. Therefore, this console doesn’t require any disks and the only thing that players need is to purchase the games that they like through the Xbox Store.

Just like floppy disks have been forgotten, the time of DVDs is also going to come. Being able to play games on your console just by downloading them is much simpler and easier. Not only that, but it puts Microsoft at an advantage since Xbox fans won’t have any other options when it comes to buying new games other than to purchase them directly from the Xbox Store.

Microsoft Has Yet to Respond

The interesting thing about the disc-less Xbox One S is that Microsoft hasn’t even confirmed its existence. This leads us to believe that Microsoft is preparing a surprise event on May 7th and that the folks at Windows Central have ruined that surprise.

We should note that Microsoft is also reportedly going to equip the new console with a 1TBB HDD and that it will ship with the following games: Forza Horizon 3, Sea of Thieves and Minecraft.

The fact that the disc-less Xbox One S is going to ship with three AAA games that don’t cost a single thing is definitely going to boost the console’s sales. Talking about Xbox games, Microsoft has made it loud and clear that its primary focus is the Games Pass subscription service which costs $9.99 per month.

Therefore, the disc-less Xbox One S is showing to us that Microsoft is looking to “persuade” Xbox fans to subscribe to Games Pass instead of buying new games from third-party retailers.