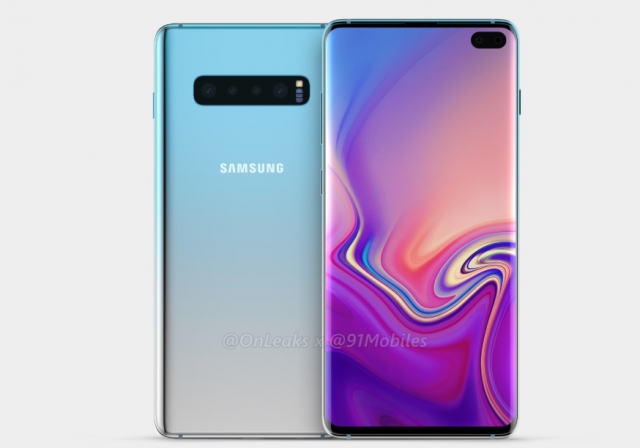 Galaxy S10 is the most highly anticipated smartphone of 2019 and therefore, tech leaksters have made it their top priority to get their hands on pictures of the smartphone months before Samsung decides to reveal it. Luckily for us and other smartphone fans, the leakster known as “OnLeaks” has posted a picture of the next-generation Samsung flagship on Twitter and it looks amazing.

Before we get into it, we should mention that “OnLeaks” has a stellar track record of predicting upcoming tech devices and thus, we think that this leaked Galaxy S10 press render is the real deal. Nonetheless, the smartphone looks amazing and it confirms the rumor that it will ship with a total of six cameras, four of which will be mounted on the rear side.

The incredible thing about Galaxy S10’s design is that Samsung has opted to install the cameras directly in the display and use a small cut out instead of the classic top-notch that the likes of Google and Apple are using right now. This small but innovative design feature is going to give Galaxy S10 the upper hand over its competition.

Since we are talking about Galaxy S10, let’s go over some of the hardware specs that the smartphone is rumored to feature on launch day. Galaxy S10 is expected to ship with a 6.2-inches curved Super AMOLED display that is equipped with an in-display fingerprint scanner.

The cool thing about this fingerprint scanner is the fact that it uses ultrasonic technology instead of light in order to scan the user’s fingerprint. Moreover, Galaxy S10 is expected to be fueled by Samsung’s own-made Exynos 9820 processor which is bundled with a Mali-G76 MP18 graphics processing unit.