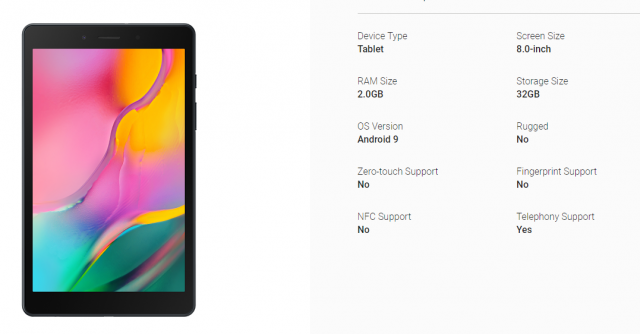 If there is one thing that everyone knows and loves about Samsung, then it has to be the fact that the South Korean based tech giant is always working on the “next big thing”. Samsung is a massive company and this is why it can afford to work on multiple devices at the same time. On the other hand, Samsung’s massive number of employees also makes it nearly impossible for the company to keep a secret.

This is why the picture (featured above) of Galaxy Tab A 8.0 (2019) has been leaked. The great thing about this leaked press material is that it doesn’t just show us that design of Samsung’s next-generation tablet, but it also reveals what hardware specs it will have to offer.

From the looks of it, Galaxy Tab A 8.0 (2019) will not ship with an extraordinary design. This is bad news for Samsung fans since rumor had it that the next-generation tablet would feature a full-screen design, similar to Samsung’s latest Galaxy S10 flagship smartphone. Nonetheless, the display of Galaxy Tab A 8.0 (2019) measures in at 8.0-inches. To top it all off, the display uses TFT LCD display technology.

Thanks to previous leaks, we know that Galaxy Tab A 8.0 (2019) is powered by a Snapdragon 450 GPU that is paired to an Adreno 506 GPU and a massive 7,3000 mAh battery which features fast charging technology. In addition, the tablet supports 4G LTE connectivity.