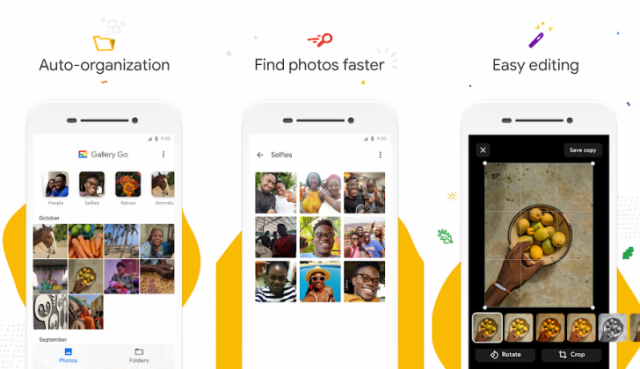 Even though companies such as Samsung, Huawei and Apple keep launching high-end smartphones that feature incredible hardware specs and impressive designs, there is a big downside to them. The problem with all these high-end smartphones is that they all are priced close to the $1,000 mark and this means that not everyone can afford to buy them. Fortunately, Google is aware of that and it keeps launching native Android apps for lower-end smartphones and a brand-new one has just arrived. Gallery Go The new app from Google is called Gallery Go and it has been designed for the sole purpose of making it easier for Android fans to organize their photos. The great thing about the app is that it’s a lightweight release which means that it weighs in at less than 10MB and that it can run on older smartphones without any problems. Offline usage One of the best things about Gallery Go is the fact that it can be used while offline. To make things even better, Google has equipped the new Android native app with the same machine learning features and photo editing tools as the bigger Google Photo apps. Worldwide Release Gallery Go is currently available for download in Nigeria, but Google is surely going to release it worldwide during the upcoming months. The reason why Gallery Go has released the app first in Nigeria is due to the app’s highly optimized software and lightweight size, the app is designed for Android fans who live developing countries where access to the internet is limited. microSD Support Even though Gallery Go is designed for lower-end smartphones that usually do not support microSD cards, the Android parent has made sure equip Gallery Go with microSD anyways. After all, most people store their photos on the microSD in general.