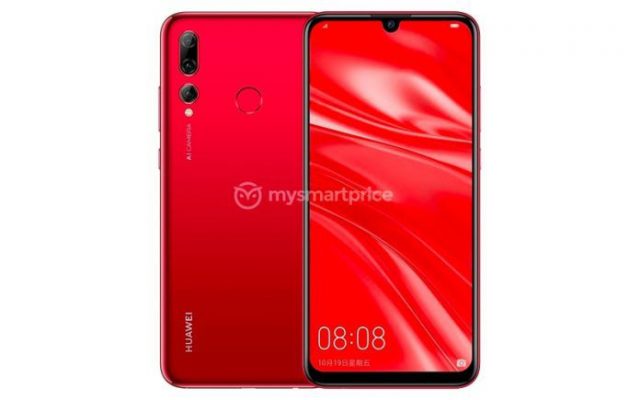 Huawei announced yesterday that it plans to hold a big media event on March 25th that will take place in China. The Chinese based tech giant confirmed that it will use the event as a platform to launch three new devices. The new devices are Enjoy 9S, Enjoy 9E and the MeidaPad M5 Youth Edition tablet. Fortunately, we don’t have to wait any longer in order to check out Enjoy 9S because the smartphone’s official press renders and hardware specs have been leaked earlier this morning.

Enjoy 9S is going to be a premium smartphone that ships with a U-shaped display top notch where a single selfie camera is being housed. The smartphone’s design also seems to feature a thicker bottom bezel, but it doesn’t look that bad. In addition, the leaked press render reveals to us that Huawei has equipped Enjoy 9S with a triple camera-setup on the back alongside a circular fingerprint scanner.

We got lucky and Enjoy 9S’s hardware specs were leaked as well. Therefore, the upcoming smartphone is going to ship with a 6.21-inches display that uses IPS LCD technology. The display will offer a pixel resolution of 1080 x 2340 Full HD+ and it will also offer a 19:5:9 aspect ratio.

Leaving the display aside, the smartphone’s most impressive hardware part is hidden beneath its hood. Enjoy 9S is going to be fueled by a HiSilicon Kirin 710 CPU. This is an octa-core processor that offers four ARM Cortex-A73 cores which clock at 2.2GHz and four ARM Cortex-A53 cores that clock at 1.7GHz.

As if the smartphone doesn’t look powerful enough yet, Huawei has made sure to pair the HiSilicon Kirin 710 CPU with 4GB of RAM and 64GB of internal storage space. There will also be a 128GB version of the smartphone but it will cost a little bit more.