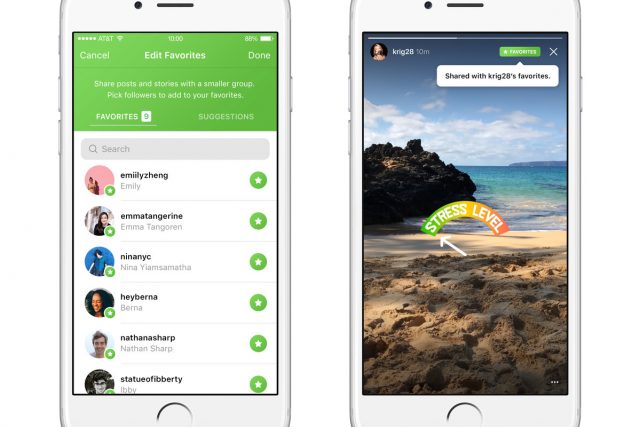 One year ago Instagram announced that it’s working on a new feature dubbed as “favorites”. This feature was supposed to revamp the friends list on the social media app and to give users a way to share moments from their life with a personal list of close friends. The reason why Instagram felt like the “favorites” feature was required is that people would keep creating private accounts where only their closest friends were allowed to follow them.

Fortunately, Instagram has finished working on the new feature and it’s launching it today. The feature has been renamed to “close friends” and it lets users share Stories with pictures and videos only to a limited number of people that they want.

How to Use It

Instagram users who want to give the new feature a try need to open the Stories camera and then take a picture or record a video. After this is done, the user can tap on the new green circle icon that has a white star inside and then manually select a limited number of followers that they want to see the shared content.

What’s cool about this feature is that Instagram will analyze the people that the users interact with the most and then make suggestions for close friends. Robby Stein who is the product leader at Instagram said that beta testers of this feature usually added around two dozen people to their close friends circle.

This feature is not groundbreaking by any means. However, it’s still a nice addition to the already plethora of features that Instagram has to offer and it shows us that the developers of the app are never going to stop improving it. With that said, make sure to create a list with your own close friends and share precious moments from your life.