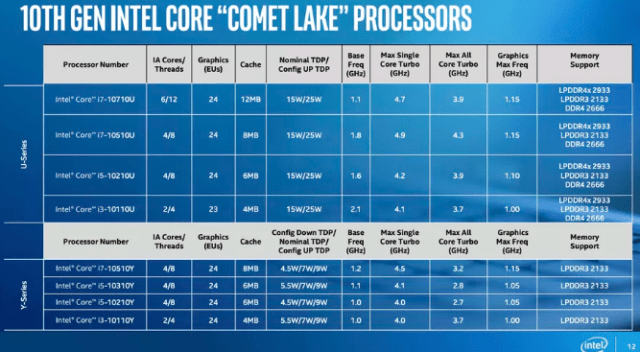 We have some great news to share with PC fans worldwide! Intel has introduced a slate of new processors that are being added to its 10th Gen lineup. The new lineup is called Comet Lake and it introduces more eight new processors. The 10th Gen processors from Intel will all use the 14nm process which is quite different in comparison with the Ice Lake 10nm processor.

To make things even better, the all-new Core i7-10710U will be the first hexacore U-series processor and it features a total of 12 threads and a higher max speed than most of the Ice Lake CPUs.

The Comet Lake lineup will use a previous version of integrated graphics which is denoted by the lack of a “G” followed by a number in their lineup. This means that people who are interested in buying one of these processors will also need to have a laptop that features dedicated graphics from AMD or NVIDIA because otherwise, the new 10th Gen processor will not be able to do much by themselves.

Even though Intel has yet to announce the official launch date for the new lineup, the tech giant did announce that we should expect the Gen 10th processors to launch somewhere during the holiday season.

Therefore, we only have to wait a couple of months before we can snatch one of the new processors. In addition, the processors will more than likely be equipped on cheaper models of Ultrabooks, 2-in-1 laptops and other types of laptops.

The biggest downside about Intel’s decision to use the 14nm processor is that the eight new processors will not have the same benefits as the 10nm chips. However, this doesn’t mean that the new processors are not going to be efficient or feature powerful battery life so Intel fans don’t actually have something to worry about.