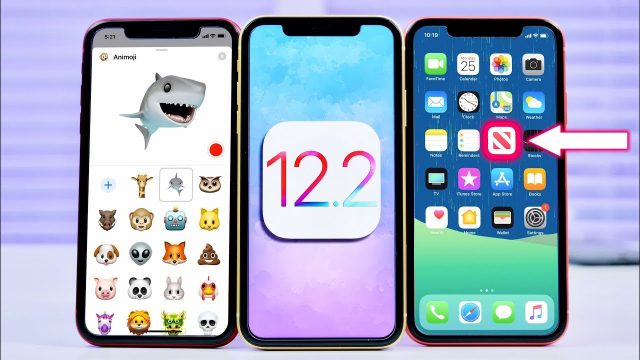 Apple hosted a big event on March 25th where it announced bunch of new subscription services such as Apple News, Apple TV+ and Apple Arcade. In the midst of all these announcements, Apple also released a new software update for iPhones and iPads which sports the iOS 12.2 version number.

Due to the fact that Apple revealed so many services, the new iOS 12.2 update was overshadowed and many people didn’t even hear about it. However, we are advising all iPhone and iPad users to download it as soon as possible because it introduces fixes for more than 50 security issues.

The new update is currently being rolled out OTA (over the air) and therefore, iPhone and iPad users should make sure to keep the Wi-Fi connected in order to get the update as soon as it arrives. The reason why this is such a high priority update is because it introduces four new Animoji (boar, giraffe, owl and shark) and more importantly, it fixes more than 50 security issues.

If the update has yet to arrive in the notifications panel, then iOS fans should be happy to know that they can always manually trigger it to arrive earlier. This can be done by following the next steps: Settings – General – Software Update – Now, select the “Download and Install” option.

We should also mention that manually updating the iOS device will require users to type in their passcode in order to confirm the action.

How to Update from iTunes

The first step is to connect the iOS device to a computer and then open iTunes on that computer. Next, select the iOS device from the iOS menu and then select Summary – Check for Updates. All that is left now is to click on the “Download and Update” option.