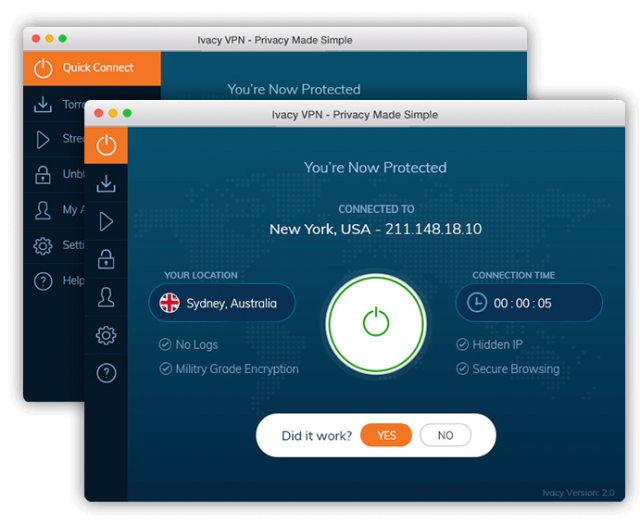 Ivacy has upheld its legacy of excellence by stealing the VPN Awards Show 2019. It comes as no surprise that Ivacy VPN received nominations for multiple categories from BestVPN.com. Best VPN Awards is the part of the annually held event Affiliate West Summit 2019. Not only the company grabbed the “First Prize” for the category of “Fastest VPN” but also was declared the second best VPN to deliver the Best Overall Value. It also remained on the second spot for the category of “Best Value”. Obviously, it was not for the first time that Ivacy eclipsed its rivals; it has a deep history of similar triumphs.

Who are Ivacy VPN

Founded in 2007 and having its headquarters in Singapore, Ivacy is one of the most prestigious data security and privacy service provider.  The bench of experts at Ivacy is always committed to deliver optimal client satisfaction. The company aims to build accurate insight into the core needs of its family of customers and leaves no stone unturned to exceed their expectations. With proven track record and the history of success stretching over more than a decade, Ivacy stands out and appears to be the shiniest star on the horizon of virtual private networking.

Why You Need a VPN

Before we enter into the details as to what Ivacy does, how it functions, what makes it a trustworthy name and what makes it stand apart from the competition, it is fundamental to understand why you need a VPN in the first place. The Internet is not free from its drawbacks. Whereas it opens the doors to an endless universe of information, it also makes you vulnerable to critical threats of privacy breach and data theft.

The security threat becomes even more pronounced when you choose to surf through an open-source or unsecured internet connection. As you appear online using an unsecured connection, you are at a high risk of exposing your identity and losing your data. Professional hackers are always on the watch for any loophole left by a user with their traps spreading all around. Not only this but also your information remains readable for your internet service provider as it flows through an open channel.

VPN is arguably the best solution for the internet users who attach value to their privacy and the security of their data. A Virtual Private Networking software creates an encrypted tunnel between the user and the internet service provider through which the data-packets flow in unrecognizable form. Hence, neither a hacker nor your ISP can get the slightest opportunity to ever eavesdrop on your data. Hence, the best thing you will ever find to keep you protected against the privacy threat is simply a trusted VPN service provider.

What is behind Ivacy’s Success

Ivacy VPN has grown into a giant network serving the needs of thousands of its customers around the globe. The company prides itself for having a stainless track record along with a broad range of services and features to offer. Some of the potential factors contributing to its worth include as follows:

A name of trust

The virtual world is teeming with scammers that claim tall and cause you to end up in utter disappointment. In the scrape of liars piling all around, Ivacy goes out of its way to uphold its commitments making it a highly credible name in the market. The time that Ivacy has spent in the market is enough to serve as the evidence of its worth and the value that it creates for its clients. Furthermore, as you enter the phrase, “Ivacy VPN” in Google Search box, you will find an abundance of highly positive reviews from the people who have had a good time using this wonderful application. Not only this but also ever-growing customer-base of Ivacy is indicative of the customer satisfaction that it delivers.

Since its inception, Ivacy VPN is unfailingly serving its customers with its foolproof mechanism enabling it to safeguard its subscribers’ online identity and their sensitive information. It is ranked among the best data security applications due to its unconquerable security gateway. Ivacy keeps you secure with its 2 GB RSA Key. With such a thick key, it makes it impossible for hackers to apply their guesswork to your secure internet connection.  With an encrypted tunnel, it also gives your internet service provider not chance to have any clue about your browsing or streaming habits.

Once you set up Ivacy VPN on your device, you will hardly face any difficulty in becoming familiar with its features, functions, and navigation. It offers an uncluttered and sleekest interface with smooth navigability. There are instructions and tutorial available to further assist you and to build your understanding of all its key areas of functionality. If you still have any trouble, there are technically well-versed customer support agents to solve each of your queries.

When VPNs began to offer encrypted tunneling, it appeared to be problematic for certain customers due to their peculiar transactions. For instance; sometimes, vendors have to work in collaboration with their suppliers due to which they have to provide them easy access to selected parts of information. However, with the traditional concept of VPN, it was impossible to classify the data into protectable information and the information that needs to be made available through an open channel.

In order to solve this puzzle, Ivacy pioneered one of the most innovative solutions namely “split-tunneling” which seems to have now become a norm of virtual private networking. With split tunneling, you can split your data easily into different categories based on the level of its sensitivity and let them flow through different tunnels accordingly. In this way, the protectable information will keep flowing through encrypted tunnels while keeping the other parts of information available through an open source. Hence, you won’t need to sacrifice the speed and flow of your activities for the sake of ensuring your security with split tunneling enabled.

VPN subscribers usually complain of low speed connectivity or frequent distortion. It is rare for them to have a stable connection which becomes irritating especially when you need to get some job done quickly. Here again, Ivacy remains prominent by allowing its users to enjoy high speed, hassle free, and seamless connectivity. Most of the subscribers are of the view that they experienced comparatively (even) higher speed after installing Ivacy on their device. You get excellent downloading and uploading speed with most of its servers. At times, you might face some issues with a single or two access points but you have the luxury of choosing among more than 1000+ servers.

Ivacy VPN, while giving you 100% online security & anonymity, also allows you to experience global entertainment without meddling with the online geo-barriers that restricts your access to content (videos, music etc.) and create hindrances for you in viewing your favorite movies or shows on the web. Ivacy, with its Fastest VPN servers, gives you an edge when it comes to buffer-free streaming of online Video-On-Demand services like Hulu, Netflix, Vudu, Sling TV, YouTube, etc even if they are restricted in your region.

The giant among all is Netflix and Ivacy has ample nodes & servers to support American Netflix, hence a user can connect to fast streaming servers with this Netflix VPN and enjoy ultimate streaming anywhere in the world.

One of the key advantages of Ivacy VPN is the support for a range of devices be it Desktop, laptop, smartphone, or any other under the sun. Users should ideally set up Ivacy VPN on each of their devices and sync them together to have a customized configuration. With such wide compatibility, it is preferable especially for people who have to switch among their devices every now and then.

Torrenters are facing challenges in the face of tightening regulations relating to intellectual property. Regulators have already slapped bans on many renowned torrenting platforms. Some platforms are also facing geo-restrictions. However, you can enjoy unrestricted ease of peer to peer file sharing if you are using a Torrent VPN. With its ability to bypass geo-restrictions, Ivacy VPN is poised to let you enjoy endless torrenting without worrying about irritable regulations or blocks.

You can get a whole lot of cool features and benefits at a cost per month which is lower than what you pay for a burger. Yes, all you have to pay is only $1 per month (for five-yearly package) which may sound ridiculous. You can choose among different time periods ranging from one month to five year depending on your specific needs. However, it is always recommendable to go for greater time periods as it would cost you comparatively much smaller.

With great confidence in its abilities, Ivacy offers you 30-day money-back guarantee. This is exactly why Ivacy has managed to sustain the reputation of being a highly trusted name.