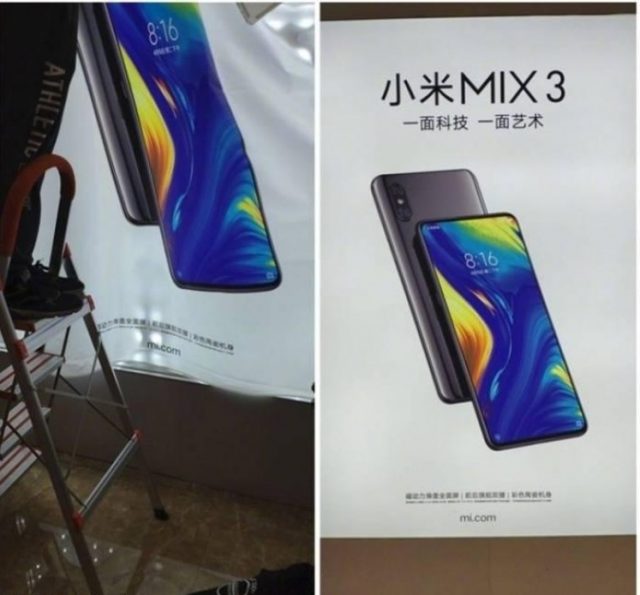 Mi Mix 3 is expected to be announced at the end of October, but this doesn’t mean that we have to wait until the 31st in order to see the new smartphone in its full glory. The reason we are saying this is because Mi Mix 3’s official press render has been leaked online and we get to what the new smartphone looks like ahead of everyone else.

From the looks of it, the press render was being put up on the stage where Xiaomi is planning to reveal the smartphone, but luckily, someone took a photo of it and decided to upload it on the internet.

What we can take from this latest leak is that Mi Mix 3will sport a spectacular all-screen design that puts in the same category as the likes of iPhone XS.

The coolest thing about Mi Mix 3’s design is the fact that the selfie camera is hidden. Instead of equipping Mi Mix 3 with a top-notch like Apple did with iPhone XS, Xiaomi decided to equip the smartphone with a slider that makes the selfie camera pop up whenever the user opens the camera app.

This is a cool feature and its surely going to help Mi Mix 3 in its competition against other high-end smartphones that are available on the market.

Keeping a secret in the tech industry is an impossible task thanks to leaks and this is why we already know that Mi Mix 3 will be powered by an octa-core Qualcomm Snapdragon 845 processor that has a base speed of 2.8GHz.

The processor is paired with an Adreno 630 graphics processing unit and a whopping 8GB/10GB of RAM alongside 512GB of internal storage space.