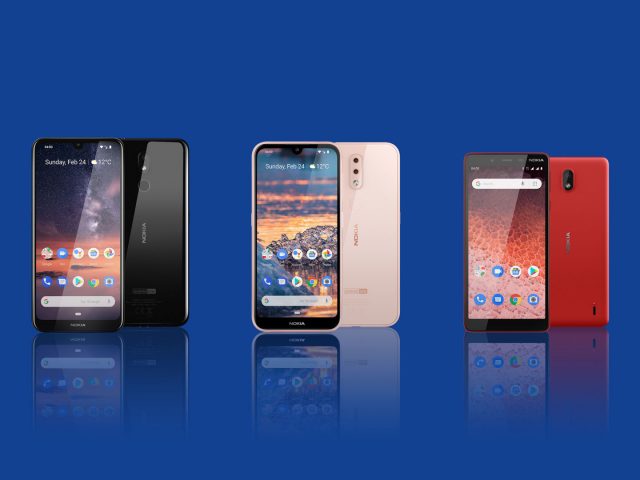 We reported yesterday that Nokia has launched its flagship smartphone for 2019 during the Mobile World Congress and that it features a five camera-setup. However, this is not all that Nokia had to show off during the tech event. The Finnish based tech giant has also revealed three entry-level smartphones that are equipped with affordable prices.

Nokia 1 Plus is the most affordable smartphone in the company’s lineup for 2019 with a price tag of $99. The smartphone runs on Android 9.0 Pie and it is equipped with a 5.45-inches display that uses LCD technology. The smartphone is powered by a quad-core MediaTek CPU that clocks at 1.5GHz. The CPU is paired with 1GB of RAM and 8GB of expandable internal storage space.

Nokia 3.2 ships with a full-screen LCD display that measures in at 6.25-inches. The smartphone is powered by Android 9.0 Pie and it costs $3.2. If we take under Nokia 3.2’s hood, we are going to see that the smartphone is fueled by a quad-core Snapdragon 429 CPU which clocks at 2.0GHz. The CPU is paired with 2GB/3GB of RAM and 16GB/32GB of expandable internal storage space.

Nokia 4.2 is the most expensive smartphone in this lineup with a price tag of $169. However, Nokia 4.2 makes up for the bigger price with a sleek design and a 5.71-inches LCD display. Just like the previous smartphones, Nokia 4.2 runs on Android 9.0 Pie.

However, the difference here is that Nokia 4.2 is powered by an octa-core Snapdragon 439 CPU which clocks at 2.0GHz. The CPU is coupled to 2GB/3GB of RAM and 16GB/32GB of expandable internal storage space.