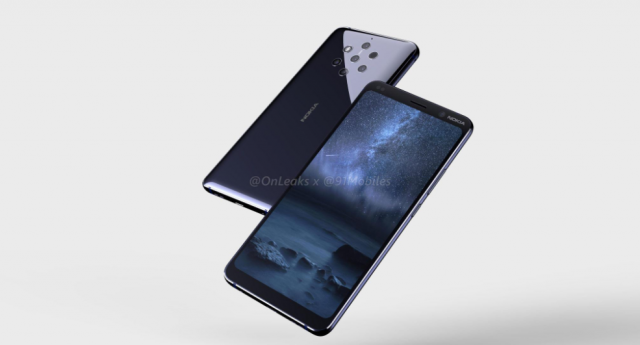 No one believed that Nokia could make a comeback in the smartphone industry after the company was purchased by HMD Global because of the tough competition that Samsung and Apple are putting up. Fortunately, Nokia managed to exceed all odds since the smartphones that it has launched during this past year have all been successful.

The reason why Nokia smartphones are selling so well is because the company offers a perfect combination of premium hardware parts and affordable prices, something which both Samsung and Apple are lacking. Not just that, but Nokia is always working on new devices and this means that its fans have lots of options to choose from.

Talking about upcoming Nokia devices, a new flagship smartphone called Nokia 9 is expected to launch in the upcoming future and a press render of it has been leaked.

The press render comes as a courtesy of OnLeaks who is known for leaking pictures of smartphones that are months away from being revealed. Nonetheless, the leaked press render looks amazing and it proves to us that Nokia wants to compete against the likes of Galaxy S9 and iPhone XS because of the full-screen design that Nokia 9 features.

The feature that stands out the most when looking at this latest leaked press render is the rear camera setup. We don’t know yet just how many lenses the smartphone will have to offer, but if something is certain, then it must be that Nokia 9’s camera is going to have great lighting because of the LED flash.

Previous leaks have shown that Nokia 9 will be a powerful smartphone that ships with a Qualcomm-made Snapdragon 835 CPU beneath the hood. This is an octa-core CPU that clocks at 2.5GHz and it is paired with an Adreno 540 GPU and 4GB of RAM.