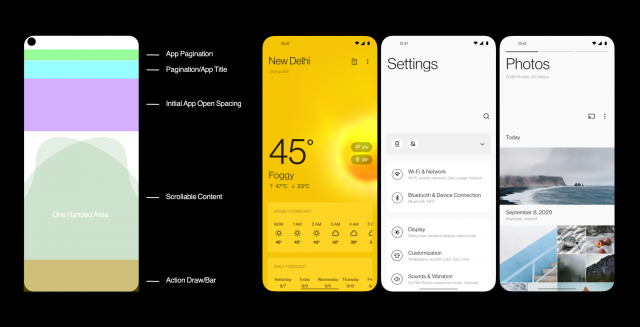 The most exciting thing about new operating system updates is that they introduce major upgrades to the user interface (UI). This is exactly what happened when OnePlus released its latest OxygenOS 11 update that redesigned the UI. The changes were so significant that the company decided to release an official statement where it reveals what influenced it to create a new look. With that said, let’s go ahead and check out what the tech giant has to say about its latest OxygenOS 11 update.

“We’ve always said that stock Android is a good starting point for mobile devices, but we also believe there’s a lot we can do to make the experience even better. One important part of that process is user testing, asking user show we can fine tune certain design aspects to improve the experience. And all the while, we apply our burdenless philosophy to improve the overall look and feel.”

“As screens increase in size, so does the unused white space. We wanted to make the most of that space while keeping the interface easy to use. We conducted A/B testing with our users to determine the best size of the headline, and found that 65% prefer slightly smaller headlines. Also, 80% of users tested preferred titles with subtitles rather than without. The result is a new headline-body hierarchy that streamlines information delivery in OxygenOS 11,” added the company.

We have to give praise to OnePlus for having the courage to completely redesign the UI of their smartphones. This is not a safe move and it could’ve easily turned out to be a mistake if fans disliked it. Fortunately, this is not what happened. The new UI gives OnePlus smartphones a fresh look and it makes them easier to use.