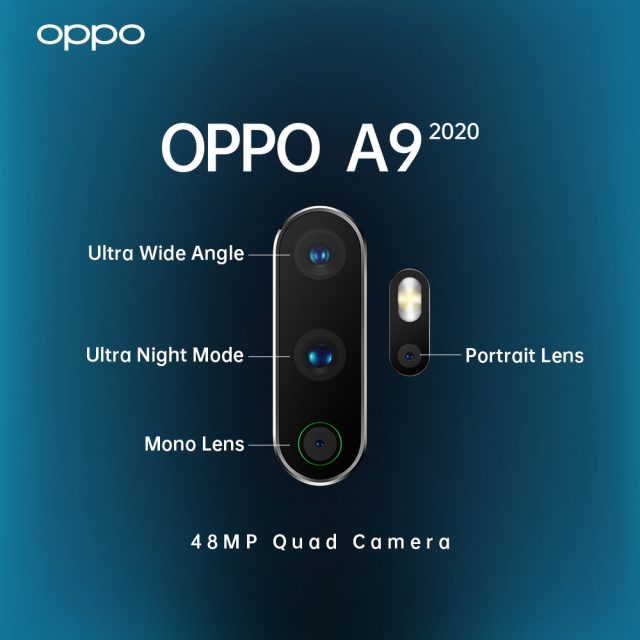 Thanks to the fact that Oppo is constantly launching high-end smartphones that deliver premium performances, Oppo is becoming one of the biggest tech companies in the world. On the downside of things for Oppo, getting put in the spotlight also means that it will become significantly more difficult to keep a secret from the media since leaksters will make it their top priority to get their hands on all the latest Oppo news. With that said, no one should be surprised to find out that the hardware specs of the company’s next-generation Oppo A9 which is scheduled to launch in 2020 have just been leaked.

The Chinese based tech giant has announced that it’s planning to launch a new smartphone called Oppo A9 in 2020. This smartphone is going to bring some serious competition to the likes of Google, Samsung and Apple because according to the latest leak, Oppo A9 will feature a quad-core camera setup.

The setup will feature an ultra wide-angle, ultra night mode, mono lens, portrait lens and an LED flash. Therefore, Oppo A9 is going to be the perfect smartphone for people who love taking amazing pictures during their holiday trips. Nonetheless, let’s go ahead and take a look at the under the hood specs of Oppo A9.

Since Oppo A9 will hold the title of being the company’s flagship in 2020, Oppo has made sure to equip it with some of the best hardware parts available such as a Snapdragon 855 processor that is paired with 8GB of RAM and 128GB of internal storage space.

The smartphone will also support microSD cards and therefore, the internal storage space can be expanded up to 512GB. Another impressive spec of Oppo A9 is the 5,000 mAh battery that will be able to last for days on end. We also want to mention that Oppo A9 is going to be equipped with a 6.5-inches display.