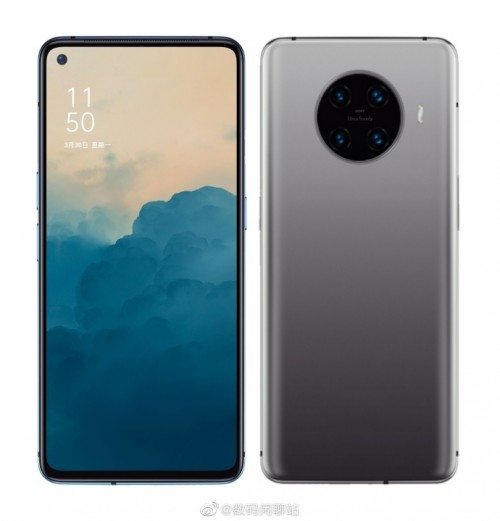 If you are excited about Oppo’s next-generation smartphones for 2020, then we have some great news to share with you. Even though Oppo doesn’t want to reveal any important information about the upcoming Reno Ace 2 in order to take the smartphone industry by surprise when it finally launches it, we got lucky and the smartphone’s official press render has been leaked.

With that being said, today we are going to cover everything there is to know about the next-gen Oppo Reno Ace 2 starting with its design and ending with leaked specs. Without any further ado, let’s get right into it.

The first thing that stands out when looking at the leaked press render is the fact that Oppo Reno Ace 2 will ship with a quad-camera setup on the rear side. The four shooters are lined up symmetrically in a circular setup. We have to give praise to Oppo for the quad-camera setup design choice because it is innovative and it looks great.

Another important design feature that can be spotted in the leaked press render is the smartphone’s full-screen display. This is a premium feature and to make things even better, the smartphone is equipped with a fingerprint scanner beneath the display. In addition, the selfie camera is hidden in the punch-hole.

Oppo Reno Ace 2 was recently spotted on GeekBench and thanks to this, we know that the smartphone will ship with a 6.5-inches display that uses OLED technology. Not only that, but Oppo Reno Ace 2 will be powered by an impressive Snapdragon 865 chipset.

This is an octa-core processor that is manufactured by none other than Qualcomm. Also, the processor is paired with 12GB of RAM and a rather massive 4,000 mAh battery.