We reported earlier today that Google has finally confirmed the official launch date of its upcoming Pixel 4 flagship smartphone. However, the Android parent is not the only tech giant who is planning to launch a new smartphone during the upcoming future. Samsung is always launching new smartphones and the next one is called Galaxy A20s.

The new smartphone from Samsung offers a blend of high-end specs and a mid-range price and this is why lots of people are highly anticipating Galaxy A20s to launch. Fortunately for us and other Samsung fans, we don’t have to wait anymore to see the design and what kind of specs the smartphone has to offer because they have been leaked.

The first thing that we want to note is that Galaxy A20s will ship with a sleek design. The smartphone uses a full-screen display that Samsung has dubbed as “Infinity-V” and it measures in at 6.5-inches. The display uses HD + TFT technology and it offers a 19:5:9 aspect ratio. 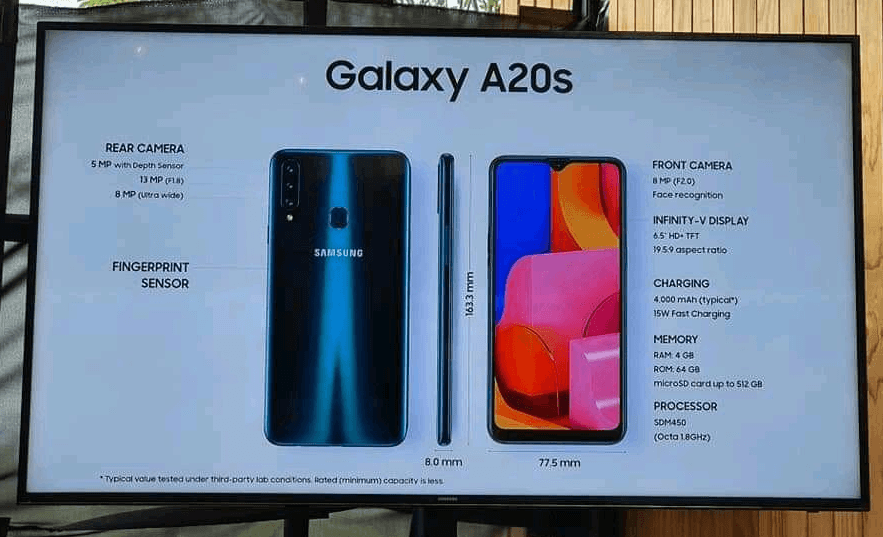 The new Galaxy A20s leak also showcases the full specs that the smartphone has to offer starting off with a Snapdragon 450 processor that clocks at 1.8GHz. The processor is paired with 4GB of RAM and 64GB of internal storage space which can be expanded up to 512GB via a microSD card. In addition, Galaxy A20s will be able to last for days on end thanks to its 4,000 mAh battery at 15W Fast Charging support.

Moving on, Galaxy A20s will ship with an 8 MP (f/2.0) selfie shooter that is equipped with face recognition technology. As if this wasn’t impressive enough, Samsung has made sure to equip Galaxy A20s with a triple camera setup on the rear side that features the following cameras 5MP (with deep sensor), 13MP (f/1.8) and 8MP (ultra-wide).