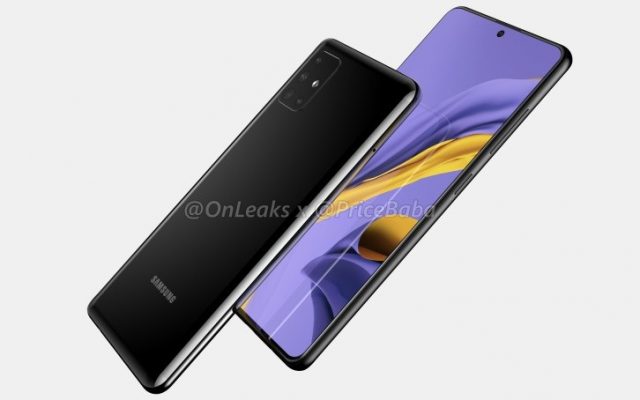 One of the things that make Samsung stand out when compared to other smartphone manufacturers is the fact that the South Korean based tech giant is catering to all budget ranges and it does this by constantly releasing new smartphones. In fact, the reason why Samsung is making headlines on our website today is because a brand-new smartphone called Galaxy A51 has just been leaked. With that being said, let’s go ahead and take a closer look at the leaked Galaxy A51 press render and see what features we can spot.

Right from the start, we want to mention that this is not the first time that we are hearing about Galaxy A51. The smartphone was first spotted on GeekBench under the SM-A515F model number and that is where it was revealed that Samsung has equipped the smartphone with an Exynos 9611 SoC and 4GB of RAM. These are the same specs that Galaxy A50s features.

The most important feature that we can spot in this latest Galaxy A51 leak is the smartphone’s highly impressive quad-camera setup. Some might see this camera setup as an answer from Samsung to Apple’s iPhone 11 which ships with a triple-camera setup.

According to the previously mentioned GeeKBench report, Galaxy A51 will feature a 32MP selfie shooter and the following lenses on the rear side 48MP + 12MP ultrawide + 12MP telephoto. Furthermore, the dimension of the display is 6.5-inches.