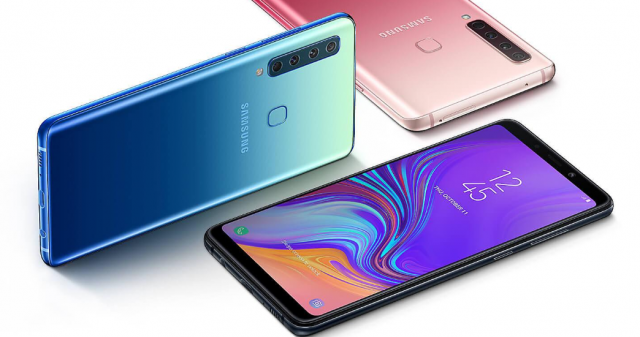 We reported yesterday that a new Samsung smartphone called Galaxy A9 Star Pro was leaked. Well, it looks like Samsung decided to use the newfound spotlight and announce that the smartphone is indeed going to launch during the upcoming future.

Not just that, but Samsung didn’t want people to be confused and it let everyone know that leaked smartphone is in fact called Galaxy A9 2018 without the “Pro” part. Maybe Samsung is planning to launch an enhanced edition in 2019.

After seeing that Galaxy A9 2018 is making headlines on all tech websites, Samsung decided to leak the official press renders for the device which reveals the impressive four camera setup that is mounted on the rear side. This is an impressive feature that’s going to give Galaxy A9 2018 an edge over its competition.

What stands out the most in this latest press render leak of Galaxy A9 2018 other than the four camera setup, is the full-screen display. According to rumors, the display will measure in at 6.3-inches and it will use Super AMOLED technology which offers a pixel resolution of 1080 x 2200 and a pixel density of 392 ppi (pixels per inch).

Since we are talking about Galaxy A9 2018, we need to mention that rumor has it that it will be powered by Qualcomm’s Snapdragon 660 CPU. This is an octa-core mobile processor that clocks at 2.2GHz and it ships with an Adreno 512 GPU and 4GB/6GB of RAM alongside 64GB of internal storage space which can be expanded up to 512GB via a microSD card.

Will it Be Affordable?

The smartphone will definitely not be cheap. It’s Samsung’s first ever smartphone to feature four cameras on the back, but the Snapdragon 660 CPU leads us to believe that it will not fit in the same price bracket as Galaxy S9 or Galaxy Note 9.