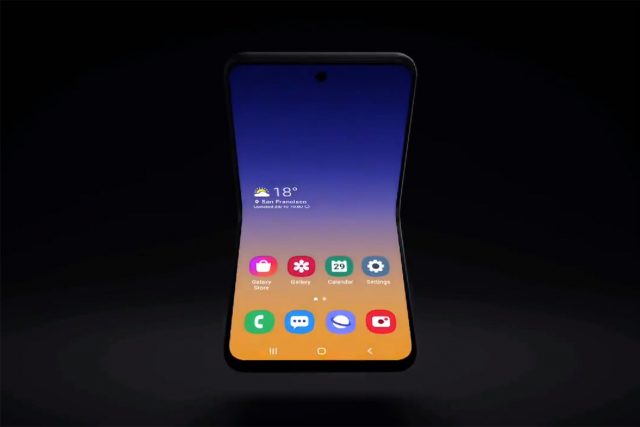 Samsung rushed last year when it launched Galaxy Fold because the foldable smartphone didn’t go through the full testing phase and it proved to not be as functional as Samsung thought. This is why the South Korean based tech giant was forced to recall all Galaxy Fold sold units and to refund all buyers.

Obviously, Samsung has learned its lesson and it’s not going to rush again for the upcoming launch of Galaxy Fold. The interesting thing about this is that Samsung had enough time to implement the foldable display technology on a new smartphone that was recently revealed.

The new foldable smartphone from Samsung was revealed during the company’s annual Developer Conference and what makes it stand out is the fact that it features vertically folding, similar to a clamshell. Samsung said that it is currently “exploring” the possibilities of the new folding display technology and this means that the second version of Galaxy Fold is not scheduled to launch too soon.

On the bright side of things, this does show us that Samsung is planning to innovate the smartphone industry with its new technology and that it’s not going to take too long before foldable smartphones will become the new industry standard as triple-camera setups have become already.

Since we previously talked about Galaxy Fold and how the smartphone is scheduled to launch next year after the first launch was a flop, let’s go ahead and check out which are the highlight specs of the foldable smartphone.

The most important feature that Galaxy Fold offers is the 7.3-inches display that uses Dynamic AMOLED technology and offers a pixel resolution of 1536 x 2152.

Moreover, the smaller cover display measures in at 4.6-inches and it uses Super AMOLED technology to offer a pixel resolution of 720 x 1680. In addition, the smartphone is powered by Qualcomm’s Snapdragon 855 CPU.