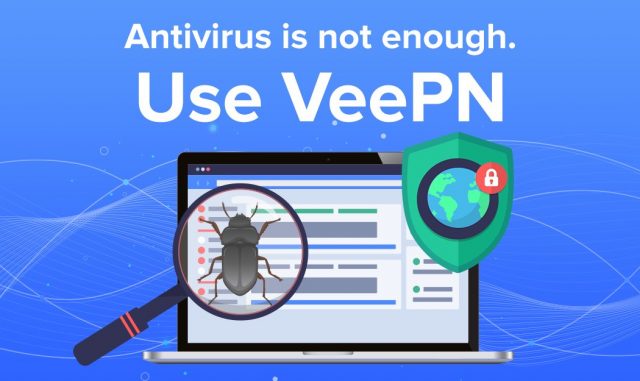 If you hate having to deal with region restrictions when it comes to watching online content or simply dislike the idea of being tracked by your IPS (internet service provider), then using a VPN is the solution for you. VPN stands for “Virtual Private Network,” and it gives users a way to browse the web with true anonymity. As previously mentioned, VPNs can be used to bypass region restrictions for video content and music streaming websites or apps, but there’s more to it than that. With that being said, today we are going to introduce you to VeePN, which is a premium-level VPN provider, and present its top features that are going to make browsing the web so much more enjoyable for you.

Right from the start, the first thing that everyone needs to know about the VeePN Android app is that it offers unlimited traffic and bandwidth. Most other VPN providers only offer limited traffic, and this already makes VeePN the better choice. To top it all off, VeePN features ten simultaneous connections and it doesn’t record any activity logs or connection logs.

Even though you might not think that someone is tracking your movements online, you can never be sure of that until you use a VPN service. For example, VeePN guarantees top-notch protection when it comes to your data because it uses bank-level 256-bit encryption. This goes hand in hand with the fact that VeePN doesn’t record any activity or connection logs.

Therefore, VeePN is the perfect choice for people who don’t like the idea that their ISP, government agencies, website owners or even search engines such as Google might be tracking their online activity. Not just that but using VeePN’s services also makes it nearly impossible for hackers to access your private data. We previously mentioned that VeePN uses bank-level 256-bit encryption and in case you didn’t know, this is the same level of security that is used by the US government.

What’s great about VeePN is the fact that it features more than 2,500 servers which are spread all over the world. These servers help VeePN maintain high connection speed and improve the security of all users. Furthermore, 1153 of those servers are located in the Americas, 1168 in Europe, 226 in the Asia Pacific, 30 in Africa, 102 in the Middle East and India. The long list of servers provided by VeePN means that users will get to benefit from premium VPN features such as seamless server switching and access to any content without restrictions.

There are lots of VPN providers and nearly all of them share the same flaw in security. The security flaw that we are talking about is caused when connections between the VPN user and the target destination fails which makes the VPN user’s data vulnerable to interception by third parties. Network connections usually fail because of firewall/router settings, changing location or VPN protocol, and slow Internet connection. Luckily, this is not a problem for VeePN users.

VeePN is equipped with a special feature called Kill Switch which automatically shuts down devices from all servers if the connection is not secure. The Kill Switch adds another layer of security to VeePN’s services, and to make things even better, the VPN network will still work even though the Kill Switch has been activated. The question that you might be asking yourself right now is if VeePN works only on PC? The answer to that question is no! VeePN features cross-platform support and it can be used on basically any smartphone or PC. In fact, let’s go over the platforms and operating systems that VeePN supports:

Even though VPN services have been around for a long time, there are still lots of people who are learning about them right now. However, this isn’t a bad thing by any means because keeping up with technology can be quite a hassle at times. Fortunately, the folks behind VeePN know that most people don’t want to deal with complicated settings and preferences whenever they install a new app or software, and this why they made the installation process for VeePN very simple. The installation process lasts only 5 minutes, and the only thing that users will need to do in order to access the thousands of servers that VeePN has to offer is just to make one tap on the UI (user interface).

We think that we made it clear how useful VeePN can on your smartphone or PC. Everyone who decides to give VeePN a try will find out that browsing the web is never going to be the same without it, this is how good the services that VeePN offers are!