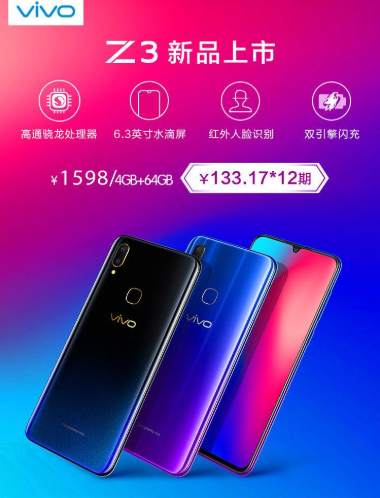 As the entire world is paying attention to the likes of Google and Samsung, Vivo is making big moves in the background. This Chinese tech giant has made a reputation for itself by launching powerful smartphones that are bundled with affordable prices and this is why its devices become bestsellers. Nonetheless, the press render for a new smartphone known as Vivo Z3 has been leaked on Weibo and it reveals some of the most important things that we need to know about Vivo’s upcoming smartphone.

The first thing that we need to mention about Vivo Z3 is that the smartphone is expected to be officially unveiled tomorrow. Therefore, it makes sense that the official press render has been leaked on Weibo, which is the Chinese version of Reddit for those who didn’t know.

The feature that stands out the most about Vivo Z3 is its Snapdragon 710 CPU. This is a powerful mobile processor that is being paired with 4GB of RAM, 64GB of internal storage space and a big 3,240 mAh battery. The CPU is impressive and it shows us that Vivo Z3 might hold the title of being a flagship smartphone.

Just like you would expect from a smartphone that is going to be called a flagship, Vivo Z3 will ship with a massive display Vivo Z3’s display measures in at 6.3-inches and it uses Full HD technology.

The cool thing about Vivo Z3’s display is the fact that it features a tear-drop design where the selfie camera is hidden. This innovative design is much better than Apple’s top-notch because it offers more screen real estate.

The poster reveals that Vivo Z3 will be priced at Rs. 17,200. This converts to $232 which is super affordable. In addition, the smartphone will be officially announced tomorrow and that’s when all of these leaks will be confirmed.