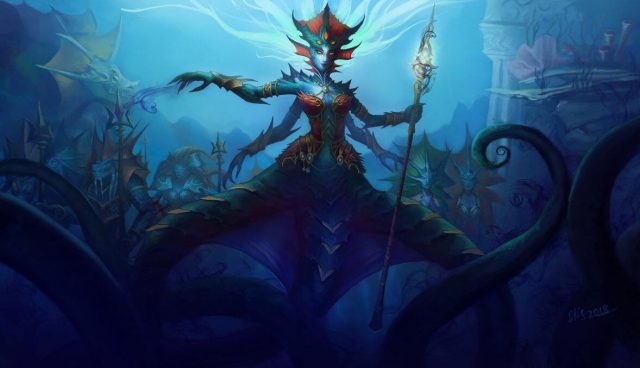 Everyone that played World of Warcraft’s latest expansion Battle for Azeroth will agree with us when we say that the game is in a bad state. The game is filled with features and mechanics that have been solely designed to artificially increase the time that people spend inside Azeroth by giving them random rewards.

Numerous reports have shown that World of Warcraft’s subscriber numbers is at an all-time low and Ion Hazzikostas who is the Game Director has decided to do an interview with “pcgamer.com” in order to reveal some exciting details about the upcoming World of Warcraft update. With that said, today we are going to take a look at the most important statements that the Game Director made during the interview.

The upcoming update is going to sport the 8.2 version number and the highlight feature that it will introduce is the Rise of Azshara raid. If we take a look at the community forums for World of Warcraft we are going to see that players are hoping that this raid will be able to bring a breath of fresh air into the game. Let’s see what Ion Hazzikostas had to say about the raid and the new patch.

“Not too long after this, we’re going to have a large info dump for the community and the [public test realm] for Rise of Azshara will start and that’s when we’ll pull back the curtains fully. We’ll have a lot more to talk about in the coming weeks of April through May. I think, high level, a lot of what we talked about at Blizzcon and have talked about since, it’s a very large content update. We’re taking players to Nazjatar and we’re taking players to the lost land of Mechagon,” said Ion Hazzikostas.

The Lost Land of Mechagon and Nazjatar

From the looks of it, World of Warcraft players are going to be taken in two new zones called Nazjatar and the Lost Land of Mechagon. “It’s two separate outdoor zones to adventure in with reputations and progression unto themselves, a large multi-boss mega-dungeon kind of like Karazhan but set in Mechagon, and, of course, Azshara’s Palace raid as well as improvements to the Heart of Azeroth and many other supporting features,” added the Game Director.

When we create endgame spaces at this point, we’re looking to draw upon lessons learned from many expansions worth of building that content. Whether it’s daily quests from back in the day or Timeless Isle, or what we’ve done more recently in places like Argus and the Broken Shore, and taking the best of those, carrying that forward, but also trying some all new things. We want it to feel not just like a familiar formula applied to a new set of terrain textures and creatures to fight, but actually meaningfully different game experience than what you’ve been doing in Kul Tiras and Zandalar over the past few months,” explained the Game Director.