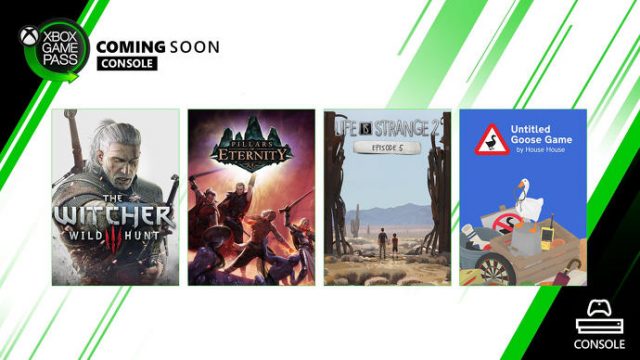 Just like Apple, it seems like Microsoft is going “all-in” on subscription services. The reason why we are saying that is because Microsoft keeps adding new AAA games to its Xbox One Game Pass subscription. Even though Game Pass already features more than one hundred amazing games, Microsoft has announced that four more are going to arrive on Thursday, 19th December. The new games are Witcher 3: The Wild Hunt, Pillars of Eternity, Life is Strange 2 and the Untitled Goose Game.

As many of you might already know by now, Witcher 3: The Wild Hunt is one of the best games ever made. The game is created by CD Projekt RED and it gives players the chance to step into the shoes of Geralt of Rivia. Geralt is a famous monster hunter and players will experience amazing adventures in an immersive fantasy world.

There is no other company that makes better RPG titles than CD Projekt RED and if you have never played Witcher 3: The Wild Hunt, then we are advising you to give it a try because this game is a masterpiece.

Just like the Witcher 3: Wild Hunt, Pillars of Eternity is an RPG game that is set in a fantasy world. The difference is that Pillars of Eternity gives players control of an entire party. There is one main character and players will encounter lots of amazing other characters during their adventures and they can recruit them into their parties.

If you are looking for an immersive game where you are guaranteed to spend hundreds of hours having fun, then Pillars of Eternity is the game for you. Additionally, this is the Complete Edition of the game which means that it features all the DLCs.