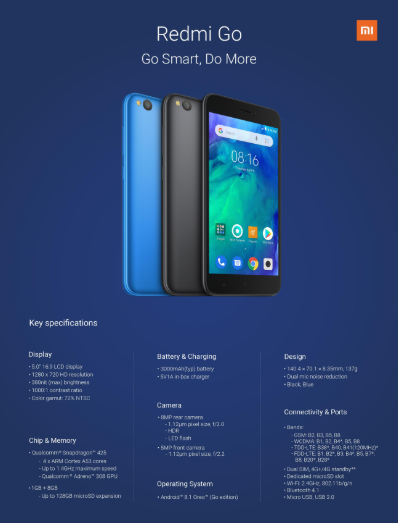 Xiaomi has made waves in the smartphone industry last year and it looks like that was just the stepping stone. We recently reported that the CEO of the Chinese based tech giant has posted a video of himself using the company’s foldable smartphone which went viral.

However, today we have something even better than that! Xiaomi has been secretly working on a new smartphone called Redmi Go and the official press render and the full hardware specs for the device have been leaked online!

In typical Xiaomi fashion, Redmi Go will feature impressive hardware specs. However, if there is something that we all know and love about Xiaomi then it has to be the fact that this company also equips its smartphones with affordable price tags. Nonetheless, let’s check out what type of hardware specs Redmi Go has to offer.

Redmi Go will ship with a 5.0-inches display that uses LCD technology. The LCD display offers a 16:0 aspect ratio and a high 1280 x 720 HD pixel resolution. While the display might not be that impressive, what’s sitting beneath the hood of Redmi Go is what really matters.

Redmi Go will be a mid-range smartphone that ships with an affordable price tag. Therefore, Xiaomi has made sure to equip it with Qualcomm’s quad-core Snapdragon 425 CPU. This processor clocks at 1.GHz and it’s bundled with an Adreno 308 graphics processing unit.

To make things even better, the smartphone is available with 1GB of RAM and 8GB of internal storage space that goes up to 218GB via microSD card.

Form the looks of it, Redmi Go will be a mid-range smartphone after all. The hardware specs that it offers are more than reliable and the only thing that we don’t know is how much it will cost. However, the mid-range specs lead us to believe that Redmi Go will feature an affordable price tag.