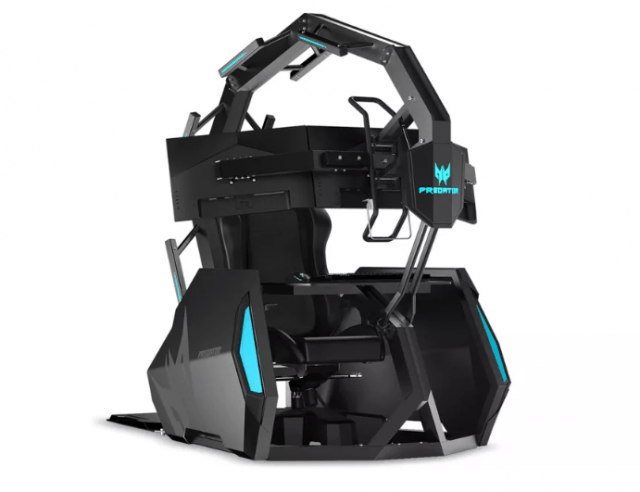 Acer shocked the gaming industry when it revealed a brand-new gaming chair called Thronos during the IFA event which took place last year. Well, Acer has spent the past couple of months optimizing and tweaking out the gaming chair and it has launched a new version of it called the Predator Thronos Air. The new gaming chair is priced at $13,999 and it offers a plethora of cool features that you won’t find anywhere else, thus making it one of the most powerful gaming equipment in the world.

The gaming chair is selling for $13,999 and while the price might outrageous, it’s actually significantly cheaper than last year’s model which was priced at over $20,000. Nonetheless, Predator Thronos Air includes a desk alongside an adjustable keyboard and mouse tray. The gaming chair is ideal for people who use three monitors, a gaming PC and a webcam that is mounted above the middle monitor.

If you aren’t interested in the expensive gaming chair, then you might want to know that Acer has also launched two new laptops which are designed to appeal to the gamer masses. The first laptop is called the Predator Triton 500 and it ships with a new 300Hz display. This is a 1080p display that helps bring the RTX 2080 Max-Q GPU to its full potential. The gaming laptop is also paired with a 9th Gen Intel Core i7 processor which ships alongside 32GB of RAM and 512GB of SSD storage. The laptop is priced at $2,799.99.

The second laptop that Acer is launching is called Predator Triton 300 and it costs 1,299 euros. This laptop is equipped with a 9th Gen Intel Core i7 processor, a GTX 1650 GPU and up to 32GB of RAM alongside 1TB of SSDs configured in a raid array.