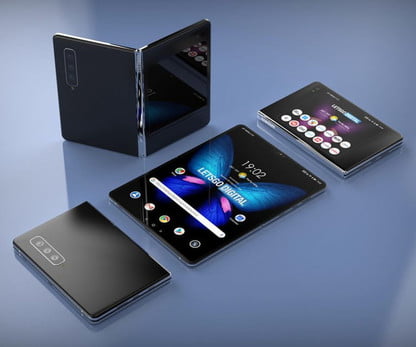 Galaxy Fold’s launch was a mess and Samsung was forced to recall all sold units. The foldable design of Galaxy Fold proved to be faulty and fortunately, Samsung was able to fix all problems in only a couple of months. However, the South Korean based tech giant doesn’t want to repeat the same mistake in 2020 when Galaxy Fold 2 is expected to launch and Samsung is going to create a new design for the foldable smartphone.

A new report from Bloomberg has revealed that Samsung is already working on a new design for Galaxy Fold 2. The interesting thing about the new design is that even though Galaxy Fold 2 will still be a foldable smartphone, it will fold in half vertically rather than horizontally. This will give the smartphone a “clamshell” design.

“The new foldable phone will have a hole-punch selfie camera at the top of the inner display, just as on the recently released Samsung Galaxy Note 10, according to one person familiar with the device. On the outside, it will have two cameras that face the rear when the phone is open or the front when it’s flipped closed,” said the Bloomberg report.

The punch-hole design is now almost a trademark feature for Samsung’s premium smartphones and from the looks of it, Galaxy Fold 2 will use the same design. However, this is not a bad thing by any means because the punch-hole selfie camera is much better than the top-notch that Apple has been using since 2017 when iPhone X was launched.

When Will Galaxy Fold 2 Launch?

On the downside of things, the report from Bloomberg is reporting that Samsung insider sources are claiming that there is no official launch date for Galaxy Fold 2. Samsung doesn’t want to be forced to recall all smartphones once again and it will launch the new foldable smartphone only once it’s sure that the design works without any issues.