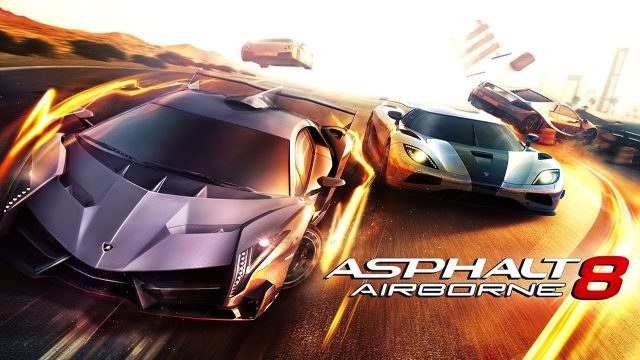 Are you looking for a fun mobile game that is going to keep you hooked to the smartphone’s display? If that is the case, then you can’t go wrong with Asphalt 8: Airborne. This is one of the most downloaded games on the Google Play Store and there is a good reason for that! Asphalt 8: Airborne gives players the chance to drive the world’s fastest and hottest cars.

Asphalt 8: Airborne features a plethora of high-performance cars and motorcycles that players can unlock by finishing races. Players also get the chance to team up or compete against their friends in amazing racetracks that will test their skills. To make things even better, Asphalt 8: Airborne is updated regularly with fresh content.

As previously noted, Asphalt 8: Airborne receives a steady stream of updates that introduce exciting content. With that said, it shouldn’t come as a surprise to find out that a new update that sports the 5.1.1a version number is now available to download. The new update is available to download directly from the Google Play Store and also manually in the form of APK (Android Package Kit).

If there is one thing that makes Asphalt 8: Airborne stand out from all the other racing games, then it has to be the fact that Asphalt 8: Airborne offers amazing in-game events. In fact, the new 5.1.1a update or Android and iOS is introducing a brand-new event called TORINO DESIGN Sport Festival. Check out the full patch notes below.

The new update is looking like a great addition to Asphalt 8: Airborne and there is no doubt about that. Now, let’s go ahead and take a look at the best features that the mobile game has to offer.

REAL LUXURY DREAM CARS & MOTORCYCLES!
• Over 220 high-performance cars and bikes for you to drive and push beyond their limits.
• Top licensed manufacturers and models, such as the Lamborghini Veneno, Bugatti 16.4 Grand Sport Vitesse, Ferrari LaFerrari, McLaren P1, Porsche 911 GT3 RS, Ducati Monster 1200 and more, including a selection of racing motorbikes!
• Newly recorded high-fidelity motor sounds for realistic audio immersion.
• Customize & upgrade your rides with over 2,300 decals to take down your opponents with style!

GET AIRBORNE WITH ASPHALT 8
• Hit the ramps and take the race beyond the limits of physics as you break free from gravity and into the sky with your car or bike!
• Perform barrel rolls and wild 360º jumps as you soar past your opponents.
• Maneuver through the air while pulling off insane stunts in your car or motorcycle to maximize your speed and find a fast route to the goal.

EXOTIC NEW LOCATIONS
• Over 40 high-speed tracks in 16 different settings, such as Venice, French Guiana, Iceland, the Nevada Desert & other exciting locations to ride your car or bike across!
• Race any track you want in original mode or its mirror variation to ensure a fresh challenge in Career mode that’s sure to keep you on your toes.
• Discover plenty of shortcuts hidden throughout every location. Mastering them is sure to raise your game to the top of the competition!

AN ENDLESS STREAM OF CONTENT FOR SPEED FREAKS!
• 9 seasons & over 400 events in Career mode, with plenty of challenges for even the most experienced car and motorcycle riders.
• Stunning visuals thanks to next-gen shaders, real-time geometry reflection & other amazing HD effects.
• Check out the Infected and Gate Drift modes for a fresh twist on racing.
• Win top prizes in the Limited-Time Cups, including early access to some of the latest cars in the game!
• A detailed damage system.

THE ULTIMATE MULTIPLAYER RACING EXPERIENCE!
• Gear up for simultaneous multiplayer action for up to 8 real players!
• Multiplayer Seasons & Leagues! Race your best against other players to score points and unlock prizes in limited-time Racing Seasons.
• Dare friends to asynchronous races as you chase your rivals’ ghost cars and bikes across the track.
• Compare scores on the new leaderboards with friends and rival riders around the world.
• Share your racing achievements and prove that you’re the ultimate speed machine.