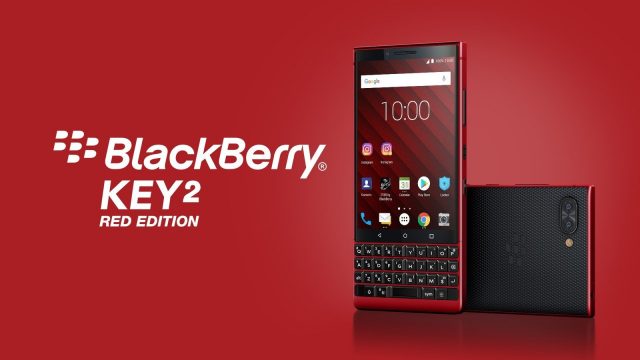 Even though it has been a couple of years since BlackBerry launched a smartphone that could “steal” the spotlight from Apple and Samsung, this doesn’t mean that BlackBerry is ready to give up yet. The reason why we are saying this is because the tech giant is launching today an improved version of BlackBerry KEY2 called the “Red Edition”. This smartphone is going to ship with double the internal storage space (128GB) in comparison with the original model and it will deliver a bunch of other unique features.

As previously noted, the smartphone is launching today in the US. BlackBerry has priced its new flagship smartphone at $699 which is $100 more expensive than its predecessor and if you ask us, we think that the extra $100 is a bit too expensive.

Other than the double internal storage space, BlackBerry KEY2 Red Edition doesn’t bring any other hardware improvements when compared with the original BlackBerry KEY2.

When it comes to the features that make BlackBerry KEY2 Red Edition better than its counterpart, BlackBerry fans should be happy to know that the new version of the smartphone is equipped with Hub+ software improvements and refreshed versions of the native BlackBerry Hub and BlackBerry Calendar apps. To make the deal sweeter, BlackBerry has bundled the smartphone with a pair of red earbuds that look similar to the red hues feature on the smartphone’s front and sides.

BlackBerry KEY2 Red Edition is going to be powered by Qualcomm’s octa-core Snapdragon 660 CPU. The two main cores clock at 2.2GHz and the CPU is also paired with an Adreno 512 GPU which ships alongside 6GB of RAM. In addition, the 128GB internal storage space can be expanded up to 512GB via a microSD card.