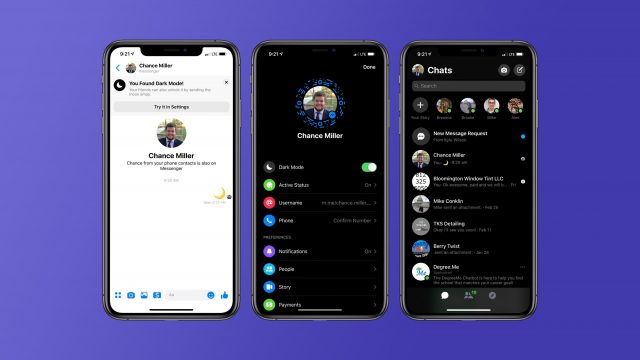 Nearly every big software developer has introduced a Dark Mode for their app in 2018 with YouTube leading the way. Now, it is Facebook’s time to impellent a Dark Mode. A Reddit user discovered earlier today that Facebook is testing a Dark Mode more for the Messenger app. The mode is currently a “hidden” feature and we can be sure that Facebook is going to introduce it to the general public during the upcoming weeks.

Since the new Dark Mode for Facebook Messenger is still in the testing phase, it cannot be enabled via the Settings page and instead, users will need to head over to a chat thread and then send a “moon” emoji to someone. After the emoji has been sent, the user has to tap on the emoji in the thread a message and the following text message will appear “you found Dark Mode!”.

After the aforementioned steps have been followed, Facebook Messenger users can simply head over to the Settings page of the app and then toggle the Dark Mode. The mode will equip Facebook Messenger with a black user interface which looks amazing on the OLED displays used by Apple’s latest iPhone X, XS and XS Max.

Since we are talking about the popularity of the Dark Mode, we need to mention that Apple is rumored to be working on a system-wide Dark Mode that is going to be introduced in iOS 13.

While this might not be a groundbreaking feature by any means, its still nice to have. People who work late night shifts or people who have problems with their eyes and hate it when the brightness of their smartphones blinds them will love this feature.