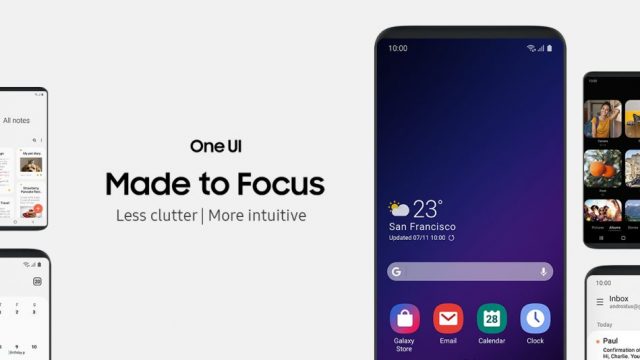 Nonetheless, the news that stole the spotlight from all of Samsung’s other announcements is the new One UI. This is a new user interface that all flagship Samsung devices are going to get and it comes with lots of improvements and a much sleeker design when compared to the existing UI.

Changing the UI of its flagship smartphones is a big risk, but Samsung was more than willing to take it. The reason we are saying this is because One UI has been designed in collaboration with Google and the Android developer community. This is Samsung’s way of showing that the only thing it cares about is providing its customers with a premium Android user experience.

The thing that stands out the most about One UI is the fact that it features a clean design. The UI is not packed with app icons, features and all other types of options which give it a fresh look. This is a change that all Samsung fans are going to be happy about.

Galaxy S8+ and Note 8 Will Not Get One UI

On the downside of things, Samsung also announced that Galaxy S8+ and Note 8 will not receive One UI. The South Korean based tech giant wants to release One UI only for its latest flagship smartphones such as Galaxy S9 for example, but where does this leave the people who spent nearly $1,000 on buying a Galaxy S8+ or Note 8?

Even though the new UI is a great addition to Samsung smartphones, we need to mention that Samsung is making a big mistake by not rolling it out to older smartphones as well because this makes it seem like Samsung doesn’t care about its loyal fans.