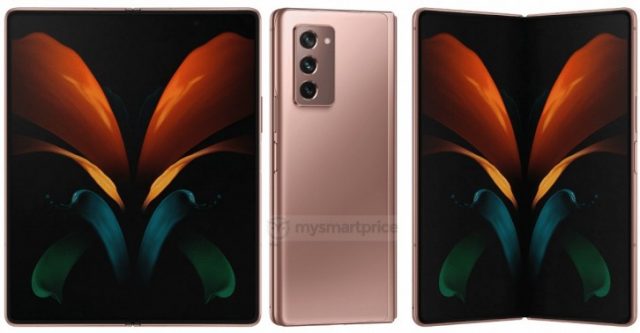 Samsung loves to innovate the smartphone industry and the perfect example of this is none other than the company’s first-ever foldable device. The Samsung Galaxy Z Fold was a success and now, the South Korean based tech giant is looking to take things to the next level and launch a new model. The upcoming device is called Galaxy Z Fold 2 5G and fortunately for us and all other Samsung fans, the official press renders have been leaked.

Despite Samsung’s best efforts to keep all pictures and details about Galaxy Z Fold 2 5G hidden away from the media’s eyes, we got lucky and the official press render has been leaked. The leak shows us that the upcoming device will still sport the innovative foldable design and that it will offer a triple-camera setup on the rear side. In addition, Galaxy Z Fold 2 5G will be available in two colors: Mystic Bronze and Mystic Black.

One problem that Samsung wasn’t able to fix when it launched the first Galaxy Z Fold was the side-notch on the display. Luckily, the notch is now being removed because Samsung has developed the punch-hole selfie camera that is going to replace it. Therefore, Galaxy Z Fold 2 5G’s top and bottom bezels are almost inexistent.

Thanks to previous leaks, we already have a good idea of what specs Galaxy Z Fold 2 5G will have to offer on launch day. The outer display measures in at 6.23-inches and the internal one extends up to 7.7-inches. Moreover, the internal display has a refresh rate of 120Hz that makes it perfect for mobile gaming. The last thing that we want to mention is that both displays use Super AMOLED technology.