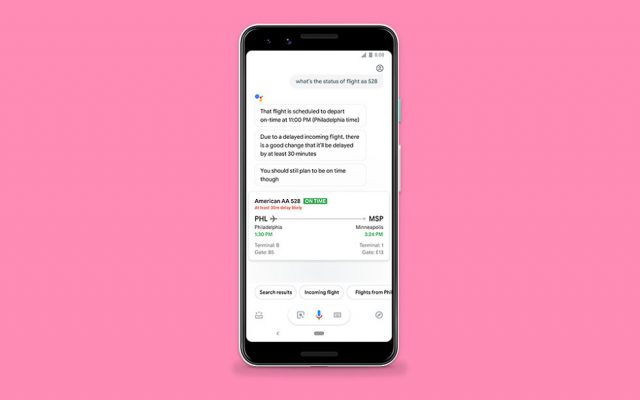 One of the best things about using an Android smartphone is the fact that you get access to all of Google’s exclusive apps and features such as the Google Assistant for example. The Android parent keeps on developing new features in order to continually enhance the Android user experience and Google has just announced that Android users are going to be able to find out if their flights are being delayed just by asking the AI assistant a simple question.

Even though Apple was the first tech company introduce an AI assistant (Siri) to its smartphones, Google didn’t waste any time and it developed the Google Assistant which has been proven to be much better than Siri. Nonetheless, Google has announced that it’s planning to start rolling out a new OTA (over the air) update for the AI assistant that will introduce a really cool feature.

Google wants to make sure that Android fans never need to access a third-party app when they are planning to go on a trip. The Android operating system already offers Google Flights that can be used to search for plane tickets or the Hotel Finder app that can be used to compare hotel prices and room availability.

Now, things are going to get so much better because a new Android update is going to make it possible for users to find out if their flights are on time, late or canceled by asking the Google Assistant about it.

We have to give praise to Google for investing so much in the AI assistant that its smartphones offer. Even though Google and Apple are in a never-ending OS war, we think it’s safe to say that Google is coming out as the winner in the AI assistant department.