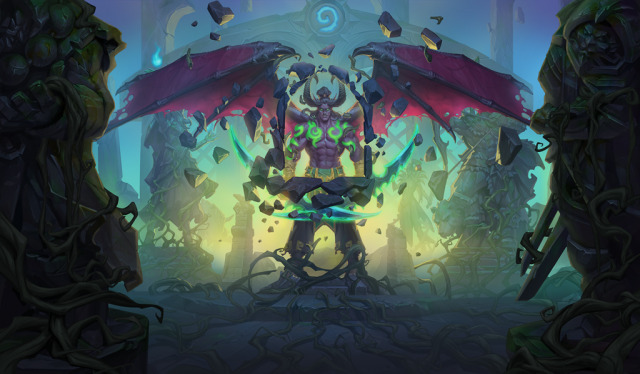 Blizzard announced last week that Hearthstone is going to receive a major update that is scheduled to introduce new cards, new game mechanics and for the first time ever, a new class. The update is called Ashes of Outland and it is now available to download for Android. This is a preview version of the update, similar to how Blizzard launches pre-patches before every World of Warcraft expansion.

The new update for the Android version of Hearthstone sports the 17.0.4422 version number and it is now available to download via OTA (over the air) channels. As previously noted, the update makes it possible for Hearthstone fans to start playing the prologue campaign so that they can unlock the game’s first new class, the fearsome Demon Hunter!

Now that we have checked out everything there is to know about the new update and how to download it, let’s go ahead and take a look at the official patch notes for the Ashes of Outland update.

Card Packs Now Have Duplicate Protection Across All Rarities

Starting today, your card packs are going to be full of the good stuff—new cards! You’ll no longer receive more than two copies of any Common, Rare, or Epic card until you have owned two copies of all cards of that rarity in a set. Crafting a card counts towards acquiring it, and any cards you acquire and later disenchant (whether golden or non-golden) count as well.

This means that if you get a card that you don’t want, you can disenchant it and you will not receive it again until you have all cards of that rarity from that set. This improvement even affects card packs you already own, but it won’t affect the overall distribution of rarities in card packs.

If you’re new to the game—or you’ve been away for a spell—we’d like to help you get right to playing and having fun. Starting today, players new to the game who graduate from the New Player ranks will get a free competitive deck from a class of their choice, built with cards from the Year of the Dragon!

Divine Shield Whenever you summon a Mech during combat, gain +1 Attack and Divine Shield.

Battlecry: Give your other Murlocs +1/+1.