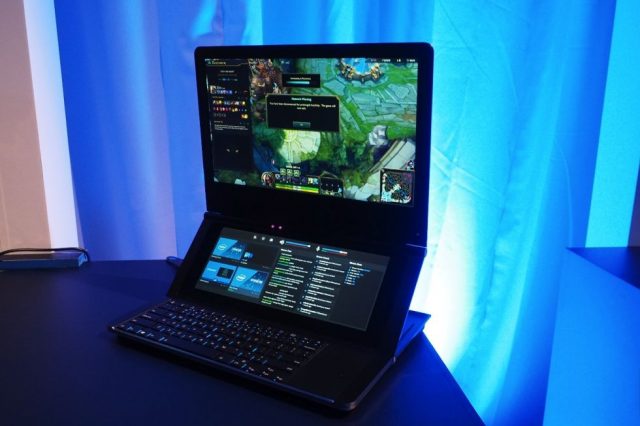 Intel has always loved to innovate when it comes to laptops and therefore, no one should be shocked to find out that Intel has recently announced a brand-new laptop that comes with dual-screens. The new laptop is called Honeycomb Glacier and it was revealed earlier today at the Computex 2019 event where Intel had its own panel.

Even though Asus was the first hardware company to launch a dual-screen laptop, Asus is now taking it to the next level because it has equipped Honeycomb Glacier with a better design than Asus’s ZenBook Pro Duo.

As we can clearly see in the featured picture, Honeycomb Glacier is a next-gen laptop that features a special dual-display setup. The setup is made from a primary 15.6-inches screen which features full HD resolution and a smaller 12.3-inches display. What’s great about Honeycomb Glacier’s design is that the width companion screen is located above the keyboard which makes it easier for gamers to keep track of their gameplay.

Even though the new Honeycomb Glacier laptop is still in the early stages, Intel has already equipped it with some of the most powerful hardware specs available on the market. The laptop ships with an overclocked 42W Core i9 processor that is paired with an NVIDIA GTX 1070.

The cooling circular vents are located under the hinge. Not just that, but the laptop also features dotted vents around the sides of the base which are going to help keep the 42W Core i9 processor cool and running at peak performance levels.

The last thing that we want to mention about Intel’s Honeycomb Glacier is the fact that the laptop features the new Tobii eye-tracking technology. Even though some might call this technology “gimmicky”, we think it’ safe to say that people who enjoy driving simulator games are going to love this technology.