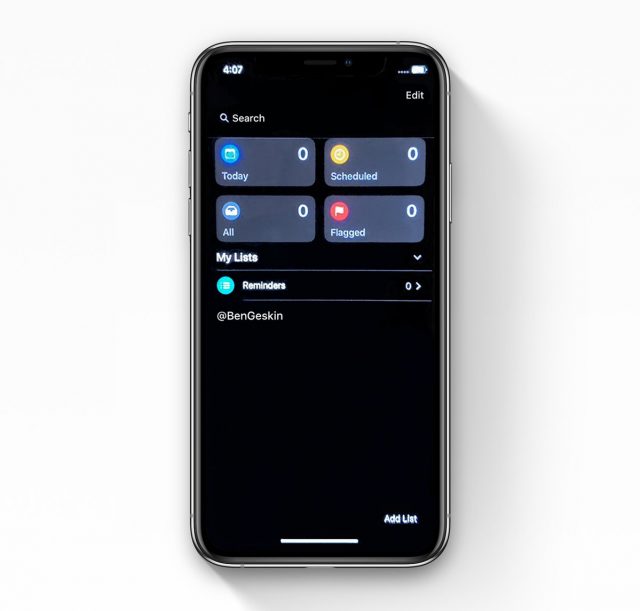 The highly anticipated WWDC event kicks off today and everyone is waiting to see what Apple has in store for the upcoming future. The Cupertino based tech giant is scheduled to reveal the brand-new iOS 13 operating system and iOS fans from all over the world have high hopes for the new operating systems. Well, it looks like we don’t have to wait one more minute in order to see one of the most interesting features that iOS 13 is going to introduce because a press render has been leaked.

First off, we want to mention that the leaked iOS 13 picture has been posted by Benjamin Geskin who is a reputable tech leakster. Nonetheless, the leaked picture reveals that Apple has designed a brand-new Reminders app and to make things even better, the Reminders app is running in the much-anticipated Dark Mode.

From what we can tell, the Reminders UI (user interface) is now located on a true black background. This is great news for iPhone and iPad fans because it means that iOS 13’s Dark Mode will shut down pixels thus enhancing the overall battery life of iOS-powered devices.

According to the leakster, this picture represents an early March build of iOS 13. This means that everything we see is subject to change and that the iOS 13 version that Apple is planning to reveal during the WWDC might look different.

Before we sign off, we also want to mention that iOS 13 is not the only operating system that Apple is scheduled to reveal. The Cupertino based tech giant has announced that macOS 10.15, watchOS 6 and tvOS 13 are also going to be revealed during the media conference.