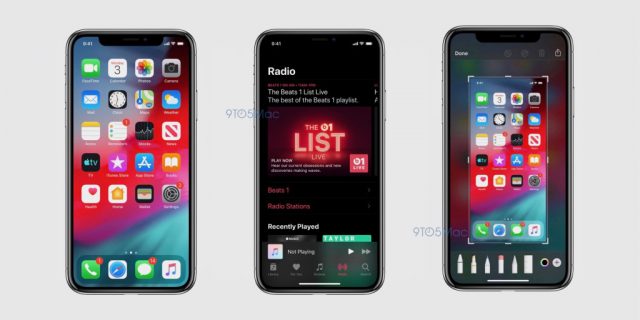 With iOS 13 only a couple of months away from officially rolling out, the internet is buzzing with rumors and speculations about what kind of features the new operating system from Apple will have to offer. The most popular rumor says that iOS 13 will introduce the much-anticipated system wide Dark Mode and luckily, this feature has just been confirmed. The folks at 9to5mac have managed to get their hands on a press render which reveals just what Apple’s new Dark Mode is going to look like.

The highly anticipated WWDC event is less than one week away and from the looks of it, Apple is adding the finishing touches to its marketing campaign. This is how the picture featured above ended up on the web. Nonetheless, all iOS fans will be able to enable the Dark Mode from the Settings app and even add a shortcut for it in the Control Center.

The most notable change that the Dark Mode makes on the Home screen is to the Dock which will look a bit different than usual. We are expecting Apple to also introduce a handful of new high-quality wallpapers that will make the new Dark Mode stand out.

The most interesting thing about the leaked press render is that it shows Apple is using a true black color for the background. This means that Apple is taking full advantage of the OLED displays that it has installed on its latest iPhones.

We should mention that the introduction of the system wide Dark Mode is also going to enhance the overall battery life of Phones since the OLED displays don’t use power to light up black pixels. While the Dark Mode might not be a groundbreaking feature, it’s still a nice addition to iPhones and iPads.