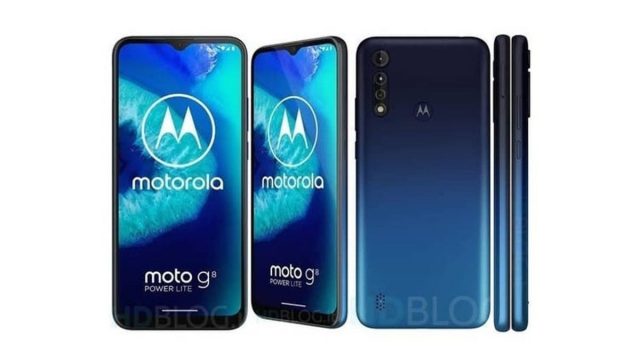 One of the things that make Motorola stand out from all other tech giants is the fact that Motorola likes to launch products for all budgets. This is why it shouldn’t come as a surprise to find out that Motorola has been secretly working on a Lite version of the highly popular Moto G8 Power.

Fortunately, the Lite smartphone is no longer a secret because its official press render has been leaked. Not only that, but Moto G8 Power Lite’s full hardware specs sheet has been leaked as well.

The first thing that we want to highlight about Moto G8 Power Lite’s leaked press render is the fact that it shows a triple-camera setup on the rear side. This is quite impressive because this type of feature is usually found only on high-end smartphones that are expensive. Another important feature that is worth mentioning is Moto G8 Power Lite’s full-screen display that is equipped with a “waterdrop” top-notch.

Despite being a “Lite” smartphone that is going to sell for an affordable price, Moto G8 Power Lite is still equipped with some of the best hardware parts available on the market. Moto G8 Power Lite will ship with a 6.5-inch display that uses HD+ technology and provides a pixel resolution of 720 x 1600.

If the MediaTek Helio P35 processor is not enough to impress you, then you should know that Moto G8 Power Lite will ship with a 5,000 mAh battery that supports Turbocharge 10W.