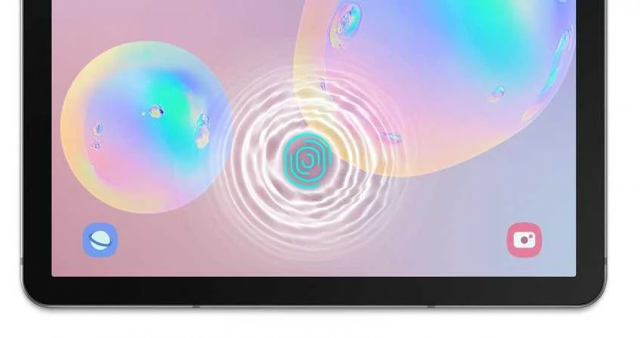 We reported Monday that Samsung’s highly anticipated Galaxy Tab S6 was leaked. The leak came from certification reports sent by the FCC and the IMDA which makes the leak as real as it can be. Nonetheless, today we have something even better to show you! A brand-new leak has surfaced on the web and it reveals that Galaxy Tab S6 will ship with a really cool feature that it’s going to put it miles ahead of all other tablets.

The new leak comes from Evan Blass who is a known and reputable leakster that somehow manages to always stay one step ahead of tech companies. The leak shows us a picture of Galaxy Tab S6 that reveals the in-display fingerprint scanner.

This is great news for Samsung fans who are interested in buying the new tablet because it means that the tablet will be able to sport a cool looking full-screen design since it doesn’t need a fingerprint scanner or any physical buttons other than the volume rockers and the lock button.

Since we are talking about Galaxy Tab S6, let’s go ahead and check out what are the highlight hardware specs that the tablet will have to offer. The first thing that we want to mention is that Samsung has decided to equip Galaxy Tab S6 with a double camera setup.

This is quite surprising since tablets aren’t generally known for their high end camera features. Moreover, Galaxy Tab S6 will feature a 13MP sensor (f/1.9) and a 5MP depth sensor alongside an 8MP front mounted selfie shooter.

Furthermore, Galaxy Tab S6 will be equipped with a massive 7,040 mAh battery that can last for days on end. In addition, the tablet’s will feature an AMOLED display that measures in at 10.5-inches.