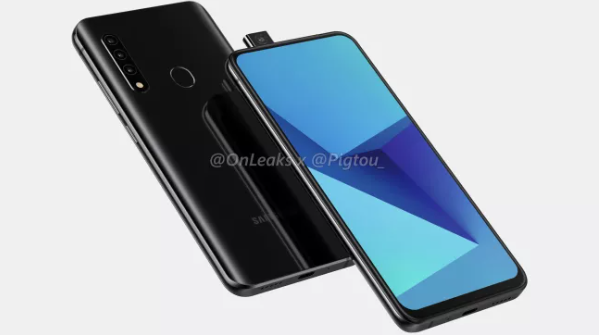 Samsung has been adamant about not “borrowing” design features from other companies and the perfect example of this is when Samsung didn’t want to use a full-screen display with a top-notch because Apple did it first with iPhone X.

One year passed and Samsung decided to start implementing full-screen displays as well because it became the new standard for flagship devices. Now, the South Korean based tech giant is ready to borrow a new design feature.

The press render for a brand-new smartphone from Samsung has been leaked and it shows that Samsung is finally ready to use pop-up selfie shooters. This is great news for Samsung fans because it means that they will no longer have to deal with the punch-hole selfie camera.

The leaked picture also shows us that the upcoming smartphone will be equipped with a fingerprint scanner on the rear side. The smartphone is probably not going to use Face ID for unlocking because the selfie camera is not always going to be out and users will have to scan their fingers instead.

Since we are talking about the rear-side of the leaked smartphone, we have to mention the fact that it will ship with a triple-camera setup. This is an impressive feature and it leads us to believe that this is going to be a high-range smartphone.

From the look of it, the pop-up selfie camera is located in a small protrusion that pops from the edge of the smartphone. The selfie shooter is not fixed on the smartphone’s center and instead, it sits towards the left corner.

Another important thing that we can spot in the press render is that the smartphone lacks one essential feature. We are talking about the 3.5mm auxiliary jack for headphones.