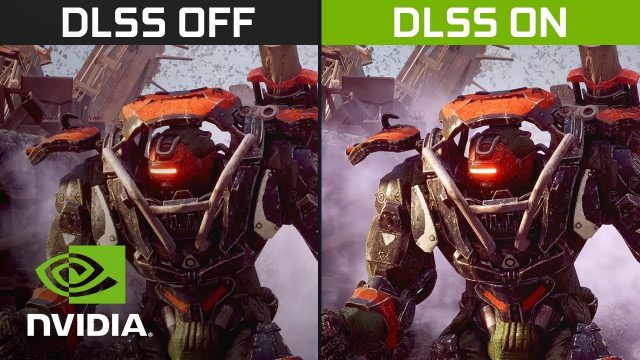 Despite being one of the worst reviewed games of 2019, Anthem is still the best-selling game of February. Therefore, the folks at Nvidia want to make sure that their GPUs can run the game at peak-performance levels and a new update has been released. The update introduced Deep Learning Super Sampling or DLSS for short and according to Nvidia, the new DLSS feature will deliver “up to 40 percent faster performances”.

The new update from Nvidia is being rolled out OTA (over the air) and everyone who owns a GPU that is eligible to receive it will get the new update. After downloading and installing the new update on the PC, Anthem fans are advised to head over to Video Settings and then access the Display’s Settings panel where they can enable DLSS. We should note that the DLSS feature is exclusive to GeForce RTX graphic cards.

Anthem fans will notice that the game looks a whole lot better after enabling the DLSS feature. This feature will take out the blurriness of the game while providing players with a smoother gameplay experience.

Considering the fact that Anthem is a game where players are flying around in giant mech suits called Javelins while throwing bombs and shooting their guns everywhere, having a stable FPS rate and improved graphics is really important.

Nonetheless, we have to give praise to Nvidia for moving so fast with the update. Anthem hasn’t been out for more than a month and the hardware manufacturer has already figured out a way to improve the performances of its GPUs.