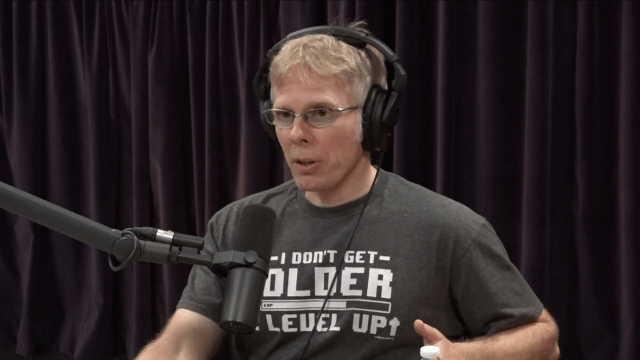 John Carmack has made his name in the software industry as the founder of 3D work at id Software but now he has switched his focus to VR (virtual reality) and AR (augmented reality) technology and holds the title of CTO at Oculus headquarters. John Carmack was invited last night on the world-famous Joe Rogan Experience podcast where he revealed interesting details about his life such as his passion for fast cars. However, the podcast was focused mainly on AR technology and where it is headed.

Joe Rogan who is the host of the podcast asked John Carmack about AR (augmented reality) glasses and when we should expect them to launch. John Carmack answered by saying that even though Oculus has made many technological advancements, they are still no ready to create the futuristic AR glasses that everyone wants.

According to John Carmack Oculus could, in fact, create a pair of AR glasses but they will look like a “shoebox-sized thing” and he doesn’t think that people would like to ear that all day long.

Even though people might want to ear the strange-looking device, John Carmack knows that it wouldn’t be socially accepted in most places and that the device wouldn’t be a success.

The biggest problem with the AR glasses is consumer application. John Carmack is saying that while the idea of having AR glasses might sound cool, most people wouldn’t actually find them useful. Another problem here is the battery life which would run out very fast.

On the other hand, we do need to mention that Microsoft has found some industrial use for its HoloLens AR technology because the HoloLens is being used in training and collaborative engineering work.

From the looks of it, we still need to wait a couple of years before we can get our hands on a pair of full-functional AR glasses. The futuristic technology is being worked on right now and it’s eventually going to launch to the public.